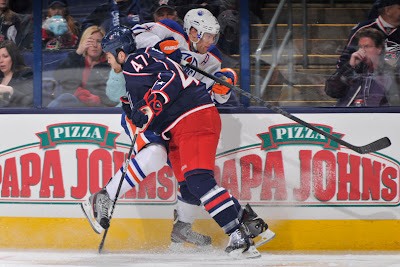 It was another day off the calender that was coupled with another important point lost by the Edmonton Oilers and their flickering hopes of competing for a playoff spot for the first time since 2006. Shootout goals from Artem Anisimov and Mark Letestu proved to be the difference, as the Columbus Blue Jackets edged the Oilers 4-3 in Tuesday night NHL action.

Devan Dubnyk continued his recent trend of being peppered on a nightly basis, stopping thirty-five shots in what was another losing effort. While Magnus Paajarvi continued to carry the hot hand, scoring for the second straight game, since being moved into a top six role.

It looked as though the Oilers were headed for their first positive result since opening their season-high nine game road trip, with an overtime loss in Chicago and a win in Dallas, as Jeff Petry's seeing eye point shot fluttered past Blue Jackets starter Chris Mason. Four plus minutes in and Edmonton had their lead.

Unfortunately it did not last long, as Derek MacKenzie and Vinny Prospal responded with goals over the next ten minutes, pushing the Blue Jackets out in front. Luckily for the Oil, Mason was at his "usual best" against the Oilers, allowing Ryan Whitney's harmless looking wrist shot to sneak between the wickets and get the visitors back on level terms.

Thirty-one seconds into period two, Paajarvi would bring Mason's night to a premature end, chipping home his fourth of the campaign up and over the former Calder Trophy winner. It was a move that would ultimately turn the Blue Jackets night around, as Sergei Bobrovsky was perfect the rest of the way. A far cry from the four goals against on eight shots, which Mason allowed over the first twenty-one minutes of action.

Columbus found another equalizer midway through the frame, as Taylor Hall lost his assignment, allowing Jack Johnson to skate in untouched and rifle home his second of season. Just like that, the lead was gone and the ice started to tilt towards the Oilers zone.

Neither side could find the winner over the final thirty minutes, as both Bobrovsky and Dubnyk came up with some big stops over the final frame. Edmonton were handed a glorious opportunity in overtime, as Nick Foligno was called for closing his hand on the puck, just twenty-five seconds in.

Despite pinning the Jackets in their end for much of the man advantage, the Russian netminder was simply sensational, making a pair of monumental stops off Jordan Eberle. That forced this one into a shootout, where Bobrovsky stoned both Sam Gagner and Ales Hemsky, while Anisimov and Letestu made it look easy at the other end of the rink.

Former Toronto Maple Leafs tough guy Mike Brown made his debut in Oilers silks, wearing the #13 and playing just over eleven minutes on the night. The twenty-seven year old was minus one on the night but did lead the team in hits with four, playing much of the evening alongside Ryan Smyth and Ben Eager.

From here on in, the trip will only get tougher for Ralph Krueger's men, as they prepare to take on the Detroit Red Wings and Nashville Predators on Thursday and Friday night. Which will be followed by games in Chicago and Colorado, to close out their seventeen day trek.
Posted by Oil Drop at 11:05:00 pm