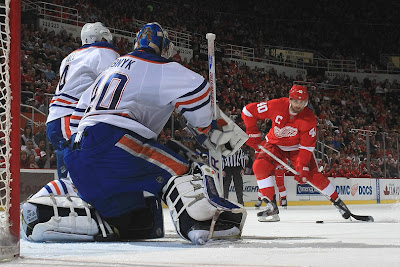 This is starting to become a little much for anyone that follows the Edmonton Oilers with any sort of regularity. While there is no shame in falling 3-0 to the Detroit Red Wings at Joe Louis Arena, this team continues to show the inability to create any sort of offence and the losses are piling up fast.

It was the same old story on Thursday night in the Motor City. Ralph Krueger's crew came out with a decent first period and found themselves in a scoreless game after twenty minutes. In typical Oilers fashion, that all changed in the middle frame. The Red Wings came in waves and thoroughly dominated Edmonton for a ten minute stretch, which saw Detroit jump out to a two goal lead.

Devan Dubnyk did himself and his teammates no favours, allowing his now nightly weak goal against, as Jakub Kindl's shot squeaked through the Oilers starter and trickled across the goal line. While Dubnyk has been solid for much of the season, his tendency to let in the bad goal at the worst possible moment, is simply too much for this team to overcome.

An ill-timed, weak goal against is hard for the best of teams to overcome, never mind the Oilers. There are those who will argue that Edmonton still had thirty-six minutes to come back and pick up their netminder but for this team, at this time, that goal was a back breaker.

The Red Wings took over from there and before the period was out, Cory Emmerton pumped home his second of the season, after another extended period of pressure in the Oilers zone. With this club's inability to find the back the net with any sort of regularity and in the midst of a season-high nine game road swing and having lost six of their last eight games...this one was all but over.

Despite losing Ales Hemsky early in the second period, courtesy of taking a Kindl blast off his boot, rookie Nail Yakupov continued to see only minimal time in Edmonton's top six. Instead the Oilers bench boss continued to use the young Russian sniper on a line with Eric Belanger and one of Ryan Jones or Ryan Smyth.

Yet they continued to regularly send Smyth over the boards to play alongside the likes of Jordan Eberle, Sam Gagner, Taylor Hall and Ryan Nugent-Hopkins...though he looks completely out of place. The fact Krueger keeps going back to lines that are clearly not working, is rather puzzling.

To be honest, the only time Edmonton had any sort of sustained pressure in the Wings zone, was when the trio of Eberle, RNH and Hall were reunited. At this stage of the game, one would think the priority would be getting the three youngsters back together, in hopes of  finding at least one line that could create some sustained pressure. Instead, it looks as though using #94 is more of a priority.
Posted by Oil Drop at 10:23:00 am