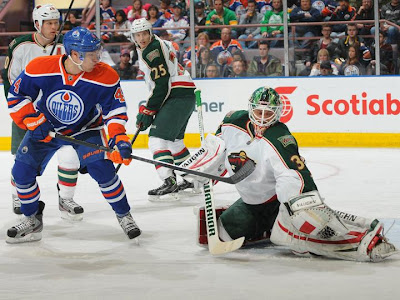 In their first opportunity to make an impression on new GM Craig MacTavish, the Edmonton Oilers proceeded to come out as flat as board on Tuesday night, falling by a score of 5-3 to the Minnesota Wild at Rexall Place. The loss was their sixth straight, which is a feat that has not been achieved in this neck of the woods since December 2009.

The year which signified the start of the rebuild and the ultimate drafting of Taylor Hall with their first of three consecutive first overall picks. Times are definitely tough in good ol' Oil Country.

One would think this team would have come out flying in what was the first game of the Craig MacTavish era. Instead, they allowed former Oiler Kyle Brodziak to open the scoring at the 1:01 mark, courtesy of a misplayed clearance attempt by Sam Gagner. It was yet another poor start from Ralph Krueger's crew, who appear to be missing a pulse on an almost nightly basis.

They would battle back to even things up before the period was out, as Nail Yakupov and Taylor Hall combined to get the rookie winger his eleventh of the season. The duo were paired with Gagner to start the game and showed flashes of what could be a dynamic duo down the road.

As bad as the start was, the Oilers managed to get themselves on level terms but as usual, followed it up with a horrendous second period effort. Something all too familiar, for anyone that watches this club on a nightly basis.

Charlie Coyle and Mikael Granlund scored three and half minutes apart, both coming against Edmonton's re-united fourth line of Mike Brown, Lennart Petrell and Ryan Smyth, The same line which Krueger decided to put together because he liked the "energy" they created, despite having four natural centres in the starting lineup.

It would only get worse from there. Zach Parise knocked home a loose puck, twenty seconds into period three, to make it a three goal bulge. Brodziak would add insult to injury, beating Devan Dubnyk on a clear cut breakaway at the 5:34 mark, to make it a 5-1 game.

On a night in which few Oilers skaters showed any jump whatsoever, their netminder did them no favours. While Dubnyk did not allow a goal that one would consider weak, at some point, feel free to make a save big guy. Though in his defence, perhaps watching the vast majority of his teammates sleepwalk their way through the last three games, has Dubnyk wondering if it's even worth the effort.

As per usual, Edmonton played their collective tails off over the final ten minutes and were handed late goals from Shawn Horcoff and Magnus Paajarvi for their trouble. Unfortunately, it was far too little and far too late to decide to show up against a team fighting for their playoff lives. Not to mention one that has now taken seven straight from them on home ice.

With six games remaining on their schedule, five on which are against current playoff teams, the chances of this getting any better seem highly unlikely. Meaning the final ten days of the 2013 season could be as painful as any in recent memory, for fans of the Edmonton Oilers.
Posted by Oil Drop at 9:40:00 am