MacTavish in, Tambellini out as Oilers General Manager 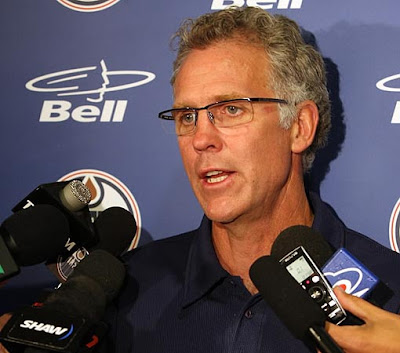 Apparently losing to a Calgary Flames side which dressed six American Hockey League players on Saturday night against the Edmonton Oilers, was the final straw. After watching this team lose five consecutive games, when it mattered most and hearing the masses screaming for change, President of Hockey Operations Kevin Lowe and Owner Daryl Katz had seen enough.

Steve Tambellini was finally relieved of his duties as General Manger of the Edmonton Oilers on Monday morning, being replaced by former head coach Craig MacTavish. From an optics standpoint, it looks like more of the same old same old, going back to the so-called "Old Boys Club". That being said, having MacTavish back in the fold, in my mind, is a positive step in the right direction.

Former Columbus Blue Jackets GM Scott Howson has officially been brought back into the fold, replacing MacTavish as the club's Senior Vice-President of Hockey Operations. To his credit, Howson was the architect of a Blue Jackets side that have arguably been the biggest surprise in the entire NHL. He will now re-assume his role as the general manager's right-hand man, a position he held prior to leaving for Columbus.

While MacTavish has no experience as a General Manager, he is more than familiar with what's what within the organization and what's expected from the Oilers fan base. Obviously, he has a close relationship with both the owner and president but no one would ever confuse him for anything other than his own man. Many felt Tambellini was nothing more than a "puppet" for whatever decision Lowe wanted made. That may very well have been the case but there is no way of knowing for sure.

If that was indeed the case, you can bet on it stopping in the here and now. Edmonton is no different than most organizations, in having a group of guys that work in tandem to make whatever decisions are deemed necessary for the betterment of their club. However, your General Manager has to have the green light to do his job. In my mind, if MacT wasn't given that hammer, he would not have taken the job.

In the end, Steve Tambellini was handed his walking papers for his inability to insulate his young talented core with a solid veteran group. Was that all on him? Probably not but he did play a big role in the moves and they ultimately failed. Is it always fair? No but it comes with the territory. Tambellini did not get the job done and it was time for the organization to go in another direction.

Whether you like or dislike the decision to bring Craig MacTavish back into the fold, ultimately, it is up to each and every individual to make.that call, Again, in my mind, the passion that looked to be missing from Tambellini, will not be something lacking from MacT. Believe or not, no one in this city wants this team to succeed more than Kevin Lowe or MacTavish and with the pieces this organization already have in place, I fully expect this turnaround to start immediately.
Posted by Oil Drop at 11:39:00 am