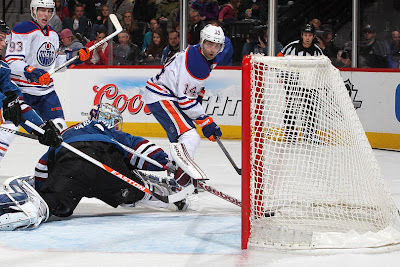 After dropping six consecutive games, which saw them fall out of playoff contention in the Western Conference, the Edmonton Oilers finally found a team they were capable of beating. Goals from the quartet of Jordan Eberle, Taylor Hall, Ryan Nugent-Hopkins and Justin Schultz paced Ralph Krueger's crew to a much needed 4-1 victory, over the Northwest Division cellar dwellers.

Eberle put together one of his best performances of the season, chipping in with a three point effort, while Nugent-Hopkins was an impressive +4 on the night. After scoring his team leading fourteenth goal of the season earlier in the evening, Hall would be forced to leave the game midway through the third, after blocking a shot on his wrist.

Netminder Devan Dubnyk was solid when he needed to be, stopping thirty-three shots, en route to picking up his thirteen win of the season. That was not the case at the other end of the rink, as Avalanche starter Semyon Varlamov continued to have his struggles with the Oilers. The loss dropped Varlamov's record to 1-4 against Edmonton on the season, yielding a minimum of four goals against, in each of his final three appearances.

Having gone well over two weeks since earning even a single point in the standings, Edmonton wasted little time finding the scoresheet, against a Colorado side they are clearly comfortable facing. All of thirty seconds after the opening faceoff, the Oilers were handed an opportunity on the man advantage, courtesy of an ill-advised Gabriel Landeskog boarding penalty.

After creating little with the early chance on the power play, Hall decided to take matters into his own hands, with the penalty nearly set to expire. Edmonton's leading scorer simply powered his way through the Avs defence, before flipping home his own the rebound, mere seconds after Landeskog stepped back onto the ice.

That goal marked the first time the Oilers had opened the scoring, since destroying the Calgary Flames 8-2, back on April 3rd. Not surprisingly, that also marked the last time this team won a hockey game.

To their credit, Colorado would fight back and even things up five minutes later, thanks to a gorgeous backhand from PA Parenteau. The goal was the underrated winger's seventeenth of the season and third on the campaign against the Oilers.

Before the period was out, Justin Schultz would put Edmonton back in front, tipping home his seventh of the year, after Eberle weaved his way through the Avalanche zone with  a bit of nifty stick work. Despite his struggles in his own end of the ice, the rookie blueliner continues to put points on the board. His two point first period effort, moving him into the top twenty in NHL scoring among all defencemen and leaving him just five points shy of the overall rookie scoring lead.

The duo of Jordan Eberle and Ryan Nugent-Hopkins would takeover in period two and put this one to bed after forty minutes. The former Regina Pats star would first play the role of playmaker, leaving a pretty little drop pass for Nugent-Hopkins to wire home his fourth of the year, for what has become a rarely seen insurance marker.

The former thirty-four goal man would widen the gap to three, pouncing on a loose puck and flipping a backhand up and over a helpless Varlamov, for his thirteenth of the year. For one of the few night's this season, #14 very much resembled the player Oilers fans had fallen in love with over the previous two seasons. Eberle's three point effort was his second of the year, in what has been a rather underwhelming campaign for the former twenty-second overall selection.

The only downside of the night, was Hall being forced to leave the game in the third. According to Krueger's post-game comments, it was more a case of the club being overly cautious, rather than it being any sort of serious injury. Barring some sort setback, it sounds as though the Oilers will have #4 back in their lineup on Sunday night, in the first of back-to-back meetings with the Pacific Division leading Anaheim Ducks.
Posted by Oil Drop at 10:50:00 am