Oilers fans are less than thrilled with Kevin Lowe 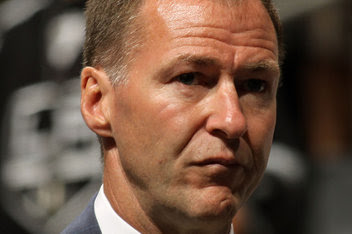 With the Edmonton Oilers recent history being what it is, Kevin Lowe was basically in a no-win situation on Monday morning. After watching the team suffer through a late season collapse, that has all but guaranteed this franchise missing the playoffs for a seventh consecutive season, the majority of fans wanted to see major change within the organization.

That change came sooner than most had envisioned, as the President of Hockey Operations announced the dismissal of Steve Tambellini as General Manager and the promotion of former head coach Craig MacTavish, into the vacant role. There were those who were on board with the move and others who did not like the optics of bringing one of the "Old Boys" back into the mix, instead of looking outside of the organization for a replacement.

Many felt Lowe was given a free pass on what has been a disappointing seven year run, for this once storied franchise. While one can easily understand that line of thinking, it is ultimately flawed. When this organization decided to finally do a proper rebuild, everyone knew there was going to be some lean years moving forward and that is exactly what that fans have had to endure over the last three and a half seasons.

Without question, it has been a painful stretch for Oilers fans everywhere but make no mistake, all this losing has probably hit Lowe harder than most.The guy bleeds Orange ad Blue and would like nothing more than to see this organization return to its previous glory. Anyone who cannot recognize that, either isn't paying attention or knows little about what makes the former nineteen year NHL vet tick.

Not surprisingly, things became a little heated between Lowe and a couple of members of the Edmonton media during yesterday's morning press conference. Questions from Sportsnet's Mark Spector and John MacKinnon of the Edmonton Journal seemed to irk the Oilers President but both were reasonable and fair questions to ask. That being said, Lowe's response was not shocking nor out of line.

MacKinnon was the one that pushed Lowe over the edge, after having already dealt with Spector's initial volley, surrounding the move being a "meaningful change for the Oilers organization." The Journal writer took it a step further, rightfully pointing out that it was this so-called new regime which "was largely responsible for the mess" Tambellini was left to cleanup.

He went on to add, "how are the fans going to be re-assured that the group that left the mess that Tambellini couldn't quite clean up is now going to be cleaned up by the guys who left the mess to begin with?" Lowe replied with, "You know, fair question. We have two types of fans. We have paying customers and we have people that watch the game and still care about, but certainly the people who go to the games and support, we spend a lot of time talking to them, delivering our message. I would, uh, I think it's safe to say half the general manager's in the National Hockey League would trade their roster for our roster right now."

Lowe continued, "in terms of the group that messed things up, you're talking about the group that had the team one period away from winning the Stanley Cup?" MacKinnon followed that up with the trigger, "That was seven years ago."

From that point on, Lowe let his emotions get the best of him and went on to explain what has taken place over the last seven years. From "chasing the dream" for a few years after the 2006 Cup run, to what has now been the first three years of their rebuild and finishing off with him talking about the six Stanley Cups he has one and knowing "a little bit about winning, if there's ever a concern."

As far as the separation of the fan base goes, which appears to have struck a chord with many an Oiler fan, it was nothing more than a poor choice of wording. To be frank, there is nothing in that statement that says anything about any sort of separation. In my mind, he was doing nothing more than trying to say season ticket holders, which they have spoken to, appeared to be on board with the direction the club is headed. Instead he screwed it up and actually changed course and went on to talk about the strength of the roster.

He simply misspoke while he was hot under the collar...not exactly uncommon for a man who tends to wear his emotions on his sleeve. Yet people tend to hear what they want to hear. Granted, Lowe has brought much of the heat he typically faces upon himself but at the end of the day, he's a competitive man, that desperately wants this team to succeed.

Understandably, most fans have run out of patience and want to see a marked improvement in the standings. However, expecting that over any point of the last three seasons, was nothing more than wishful thinking. That being said, that time has come and gone. The time to deliver starts with next September's training camp and should this club not show a marked improvement come 2013-14, than owner Daryl Katz will need to seriously consider removing his good friend from the equation.
Posted by Oil Drop at 6:49:00 am