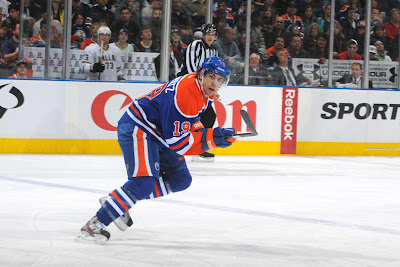 When the Winnipeg Jets announced the signing of Zach Bogosian to a 7year/ $36 million extension on Monday afternoon, Edmonton Oilers defenceman Justin Schultz had to have had a smile come across his face. With Bogosian inking a long term deal at a $5.1 million cap hit, one would think Oilers general manager Craig MacTavish will have to pony up similar type numbers, if he plans on signing the pending restricted free agent to a lengthy extension.

While the former third overall pick of the Atlanta Thrashers will be entering his sixth NHL season in 2013-14, he has not quite hit the heights of fellow 2008 draftees Drew Doughty, Erik Karlsson and Alex Pietrangelo but has arguably been as good or better than than the rest of the blueline class selected  in the first round of '08. Those names include the likes of John Carlson, Tyler Cuma, Michael Del Zotto, Jake Gardiner, Tyler Myers, Luca Sbisa, Luke Schenn and Colten Teubert.

To date, the big rearguard has put together just one thirty point campaign but continues to be a minute eating machine on the backend, that can easily be used in a shutdown role. While he may not be the same sort of blueliner as a guy like Justin Schultz, he is now making the type of money that generally goes to point producing defenceman in today's NHL.

In Schultz, the Oilers have a guy entering just his second season and while he had himself a rather up and down rookie campaign, the forty-third pick of that same 2008 draft looks to headed for a rather productive sophomore season. After posting twenty-seven points in an abbreviated forty-eight game schedule and another forty-eight in thirty-four appearances with the Oklahoma City Barons during the NHL Lockout, expecting a fifty point campaign should not be out of the question from the talented youngster.

At twenty-three years of age and the Oilers on the verge of finally turning the corner, Schultz could find himself among the top scoring blueliners as early as 2013-14. During the 2011-12 season, Karlsson led all defencemen in scoring with seventy-eight points, followed by the quartet of Dustin Byfuglien, Brian Campbell, Zdeno Chara and Pietrangelo. All four of those guys were over the fifty point threshold , with another six players falling just four points shy.

In 2013, Schultz finished tied for twelfth among defencemen in scoring, just eleven point back of P.K. Subban. Over a full 82 game schedule, that projects out to a forty-six point season. While a projection is ultimately nothing more than just that, how on earth can anyone say with a straight face that the Oilers #19 won't at least score at the same clip next season? Worse case scenario, we are talking about a forty-five point defenceman. Best case, he's pushing the sixty point mark.

With that being the case, management will have a decision to make. There are those who believe the Jets signing of Bogosian won't impact what Edmonton ultimately does with the former University of Wisconsin standout but in my mind, that's nothing more than wishful thinking. In reality, MacTavish has two choices.

Do they try and sign Schultz to a three year extension in the neighbourhood of $4 million or look to locking him up to a Bogosian type deal? It's one or other. If they want to get his name on the dotted line, it going to cost them. A six or seven year deal, will likely run the organization a cap hit in and around the $5.5 million mark. Do they have to sign him to that sort of deal in the here and now? Not at all but go ask the Montreal Canadiens how well that worked out for them.
Posted by Oil Drop at 1:48:00 pm