RNH could return sooner than most think 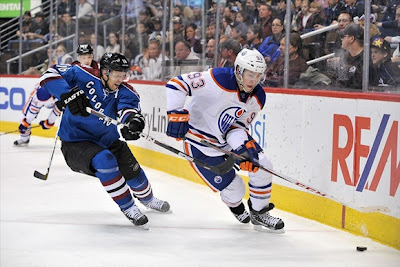 It's been fourteen weeks since Edmonton Oilers centre Ryan Nugent-Hopkins went under the knife to repair a torn labrum in his shoulder. While most seem almost resigned to the idea of the former first overall pick missing the opening month of the 2013-14 NHL schedule, don't be surprised to see #93 hit the ice in time to start the season or shortly there after.

In the minds of many, the fact Taylor Hall did not return to action until early November from his shoulder surgery, a seven month layoff, people are automatically expecting the same recovery time for Nugent-Hopkins. However, with Oilers Now host Bob Stauffer hinting on more than a few occasions that the damage in RNH's shoulder wasn't nearly as severe, perhaps the Nuge won't need as much downtime as some are fearing.

Back in mid-May, Jason Gregor interviewed agent Rick Valette for a piece on OilersNation and asked about his clients progress and possible return date. The answer was fairly straight forward and positive.

"If you look at where he is at today, I think there is a very good chance he'll be ready for opening night. If he's not ready to go, then we won't rush it, but he's already ahead of schedule and barring a setback it's looking good that he'll be ready to start the season."

Just over three weeks later, RNH confirmed as much, as he was in town for the Oilers annual Locker Room Sale and had the following to say, courtesy of the Edmonton Oilers website.

"It's going really well right now. The first couple weeks are pretty slow and you can't move it too much, so the first part is getting your range of motion back. I'm starting to strengthen it a bit now and it feels good. It feels better every day, so we're definitely taking some steps and I want to be ready as soon as possible.

"There are a couple checkpoints I need to check off before I can get back on the ice, but hopefully I can shoot pretty soon -- in maybe about a month or so.""We're not going to try and push it too much, but things are going really well and it's looking good right now."

Not sure about any of you but nothing there hints at the recovery process going slower than anyone had hoped or of any possible setbacks. Once you combine that with the fact Craig MacTavish has shown absolutely zero urgency in bringing in a potential top two centre to help Sam Gagner, leads me to believe the Oilers are not expecting RNH to miss any sort of significant time.

With the season starting up October 1st and Edmonton playing seven times over the opening fifteen days of the schedule, would their October 15th tilt against the Pittsburgh Penguins or October 17th date with the New York Islanders not look to be a realistic target date for Nugent-Hopkins? Worst case scenario, he would miss the first seven games of the season. Making the general manager's decision to not further upgrade his roster down the middle of ice, far more understandable.

Edmonton will open their season against the Winnipeg Jets, Vancouver Canucks, New Jersey Devils, Montreal Canadiens, Toronto Maple Leafs, Washington Capitals and Penguins. Outside of the Canucks and Leafs, none of those teams play an overly physical brand of hockey, making the possible addition of a Mark Arcobello to the lineup, should the need arise, far more palatable. As a short term fix, the Oklahoma City Barons top centre should be capable of holding his own.

They could look at using Hall down the middle to start the year but don't count on it. If it were for a handful of game sin the middle of the season I could see it but to have him start the year both out of position and in a spot he has no interest playing in, would be foolish on the organization's part. That being said, don't be surprised to see Hall take a large chunk of the draws upon the Nuge's return...at least for the first half of the year.

When the Edmonton Oilers announced Ryan Nugent-Hopkins would be having season-ending surgery last April, they ball parked his recovery at anywhere from four to six month. The middle of September would mark five months since he hit the operating table. Oilers fans may be fearing the worst but they are likely doing so for no real reason.

If anything, they should be looking forward to watching a healthy RNH for what should be pretty damn close to a full National Hockey League campaign.
Posted by Oil Drop at 10:40:00 am