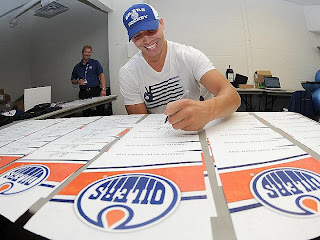 With training camp fast approaching, one can't help but wonder what Edmonton Oilers head coach Dallas Eakins has in store for his top six forwards heading into 2013-14. If you include Ryan Nugent-Hopkins into the mix, who looks to be recuperating rather nicely from off-season shoulder surgery, the Oilers top two lines will feature Jordan Eberle, Sam Gagner, Taylor Hall, Nugent-Hopkins, David Perron and Nail Yakupov. An impressive group for sure but how the rookie coach ultimately decides to deploy them, could be rather interesting.

At first glance, keeping the trio of Hall, RNH and Eberle together as the top line and using Perron with Gagner and Yakupov on the second, would appear to make the most sense. Without question, the Nugent-Hopkins line has been Edmonton's best line for two years running, despite having next to no puck luck for much of the 2013 campaign. The smart money would be on Eakins leaning in this direction but there are a couple of other intriguing options he will have at his disposal.

Positives: Gagner has shown the ability to produce with Hall and Eberle on his wings, which in turn would allow the Oilers new bench boss to shelter Yakupov with more defensively responsible linemates. Also, with both Perron and the young Russian playing on their off wings, the duo could turnout to be be ideal triggermen for the Nuge.

Negatives: Takes Nugent-Hopkins off the top line and puts more responsibility onto #89's shoulders. While both Eberle and Hall have improved in their end of the rink, #93 is unquestionably the most defensively responsible one of the three. Replacing him with Gagner, who is frankly a mess in the Oilers half of the ice, could prove to be disastrous...especially when forced to take on other team's top scoring lines.

Also, moving Hall away from Nugent-Hopkins would force the first overall pick of the 2011 NHL Entry Draft to take every draw, despite coming off a torn labrum. Hall held his own in the faceoff circle last season and would be more than capable of lightening the load on RNH in the dot.

Positives: Would keep their two best players on the first line, while still giving Yakupov the opportunity to build chemistry with Nugent-Hopkins. Both Hall and RNH have shown they can take on the opposition's best players and moving Eberle down the depth chart would give the second line better balance.

Replacing Yakupov with #14 is an instant upgrade for Gagner in his own end of the rink but still gives him two legitimate scoring options in the former thirty-four goal man and Perron.

Negatives: Like Gagner, elevating Yakupov into a first line role might be a tad much for the youngster in his sophomore campaign. He is still very much a work in progress and perhaps giving him too much too soon, or at least before he is ready to handle it, could hurt his development. That being said, #64 did take huge strides forward in his overall game throughout his rookie season.

The chances of Dallas Eakins coming in and breaking up the top line of Jordan Eberle, Taylor Hall and Ryan Nugent-Hopkins seems highly unlikely. However, should he deem the overall mix of the top two lines would benefit from a little tweak here and there, don't be surprised to see something different out of the Edmonton Oilers in 2013-14. God knows the current alignment hasn't produced many victories and at the end of the day, that is all that really matters.
Posted by Oil Drop at 10:56:00 am