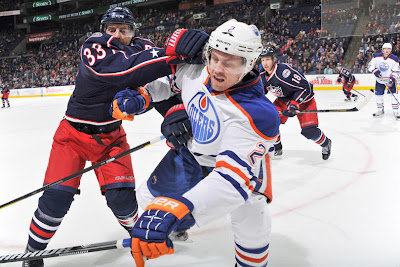 The 2013 season was not kind to Jeff Petry. After taking a major step forward in his overall development during the second half of the 2011-12 campaign, the Edmonton Oilers blueliner had his fair share of struggles during an abbreviated 48 game schedule. Be it because too much was being asked of the former second round pick and partner Ladislav Smid or simply chalking it up to just being one of those seasons, the final result wasn't pretty.

During his first sixty plus games in the league, Petry had shown little that pointed towards him being ready for regular NHL duty. The blunders were plentiful but not overly surprising for a twenty-three year old kid taking his first real crack in the show. He had trouble adjusting to the speed of the game and the physical demands of playing D in the National Hockey League.

However, that all changed on January 2nd, 2012. The Oilers were paying a visit to the Chicago Blackhawks, having lost the first three games of their five game road trip. With Edmonton trailing 1-0 in the second period, Hawks forward Dan Carcillo decided to smoke Tom Gilbert into the end boards behind goaltender Devan Dubnyk. Carcillo, who oddly enough injured himself on the play, would receive a game misconduct for boarding and ultimately be suspended by the league.

While the Oilers had just lost the services of arguably their best player, at least through the first three months of the season, for the next four weeks. Gilbert and Smid had been simply fantastic for Tom Renney's crew, making the loss even harder to stomach. With Edmonton already paper thin on the backend, Renney had little choice but to give Petry a shot at playing more minutes.

Apparently, an opportunity was all that was needed. From that point on, Petry was a completely different player. He went from playing in the neighbourhood of 18 minutes to pushing the 25 minute mark on a nightly basis, while being used in all situations. In his first thirty games of the year, he had a goal and four assists with a -2 rating. Outside of his three point / +5 outing against the Blackhawks on November 19th, the only time you really noticed the Oilers #2 was when he did something wrong ice.

However, from the moment Gilbert left the ice surface in Chicago, the former Michigan State Spartans standout became an all out force. He was pushing the pace from the backend, routinely jumping into the rush and giving the forwards the support they so desperately needed. Over Edmonton's final forty-three games, Petry not only led the club in ice time but also managed to chip in on the scoresheet, registering a goal and nineteen assists.

He did post a -5 rating over that time span but when you consider he was a combined -5 during the game on the 2nd against the Hawks and the following night in Buffalo, Petry was even player over the final forty-one games of the season. No small feat...especially on a club that plummeted down the standings after a coming out of the gate like gangbusters to start to the season.

As staggering as his transformation from a borderline depth defender to a top four defenceman was, it was the addition of a physical element to his game that was most startling. Petry went from being a guy that seemed almost unwilling to engage physically, to regularly pounding guys into the sideboards or with an occasional open ice hit. No one really knows what brought on the sudden change but much of the credit should probably go to assistant coach Steve Smith.

The former three-time Stanley Cup winner had made working on the young American's game a priority and apparently Petry took his teachings. The steps he took were so massive that the Oilers decided to actually move Gilbert at the Trade Deadline, sending him to the Minnesota Wild in exchange for veteran rearguard Nick Schultz. Just like that, Jeff Petry had graduated into being an everyday NHL defenceman.

Unfortunately for both him and the club, 2013 would not be so kind. While he and Smid came into the season as Edmonton top pairing, the duo took a step back in their overall performance. They still were logging major minutes and playing in all situations but they were nowhere near as effective. From Petry's standpoint, there appeared to be a slight regression back to some of his old habits.

He looked to have no interest in joining the Oilers attack with any sort of consistency and perhaps most puzzling of all, was the disappearance of his willingness to engage physically. He reverted back to being nothing more than a wallflower in his own end of the rink, making life far too easy on the opposition.

Petry went pointless in the Oilers first seventeen games, before finally awaking and putting up five points during the club's ridiculous nine game road trip in late February/early March. To that point in the season, the twenty-five year old was a non-factor on far too many nights. While he was marginally better over the last half of the schedule, it was not the type of performance a team needs from a supposed top pairing guy.

In his defence, Petry nor Smid were suited to take on the role they were given in 2013 but the Oilers lack of depth on the backend left the coaching staff little choice. Edmonton were either going to sink or swim with that duo carrying the mail. A twelfth place finish in the Western Conference standings tells us the club did far more sinking than swimming.

While general manager Craig MacTavish made upgrading his defence a priority during this current off-season, he was unable to add a legitimate top paring NHL defenceman. That being said, the additions of Anton Belov, Andrew Ference, Denis Grebeshkov and Philip Larsen could actually give the Oilers backend some semblance of depth for the first time in ages. With the likes of Petry, Smid, Schultz, Corey Potter and Justin Schultz already in place,  they might just be able to go at it "by committee" for one season.

With Ference and Smid already signed to long term deals, Oscar Klefbom waiting in the wings and the junior Schultz all but guaranteed to sign some sort of extension prior to the 2014-15, the question mark becomes Petry. The 2013-14 campaign will be contract year for the son of former Detroit Tigers pitcher Dan Petry and will certainly go a long way in determining his future in Oilers silks.

As things currently stand, it looks as though Edmonton will have one of three options. Sign him to an extension and make him part of the long term solution. Use him as part of the bait to try and acquire a top flight blueliner via trade or simply move him in a smaller transaction, freeing up a spot and cap space for MacTavish to look in a different direction.

His on ice performance will ultimately determine what route the organization decides to go but at this stage of the game, it is tough to say what direction he is headed. Having played just 156 career games, Jeff Petry is still adjusting to life in the NHL and what it takes to become a solid everyday player. Unfortunately for him, it appears as though the Oilers will need him to excel that process, should he want to remain a member of the organization for the foreseeable future.