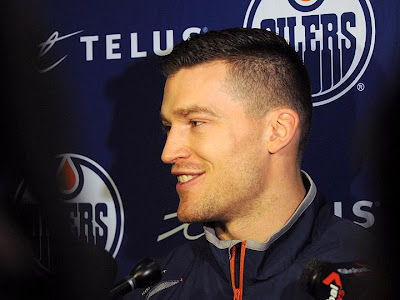 Ultimately, they fell just short of landing their "primary" target but in the long run, it will likely be the best signing general manager Craig MacTavish never made. The Oilers rookie GM was hoping to make a big splash this summer but it will ultimately be the signing of veteran defenceman Andrew Ference, which will have the most impact on the club...both on and off the ice.
The veteran blueliner may not be the top flight defenceman this team is still missing but he most certainly improves the Oilers backend in spades. Even at thirty-four year's of age, Ference will help fill a few of the numerous gaps that currently exist in Edmonton.

From a leadership standpoint, the former eighth round pick of the Pittsburgh Penguins, instantly becomes the go-to vet inside the Oilers dressing. With Shawn Horcoff being shipped out of town and Ryan Smyth nothing more than a bit player at this point in his career, Ference will be the only "leader-type" that will see regular duty under new head coach Dallas Eakins.

While the club has yet to name a new captain to replace the aforementioned Horcoff, you can bet on the former Bruins alternate captain's name being near the top of that list. He may or may not be given honour of wearing the "C" but make no mistake, his leadership qualities were one of the reason's MacTavish decided to offer him a four year package for $13 million.

As far as the defensive side of the game goes, Ference brings much of what the Oilers were looking to add to their blueline in 2013-14. While never a real point producer at the NHL level, the former Calgary Flame has always been able to transition the puck up ice and still remains a decent skater, thirteen years into his NHL career. Add to that, the veteran savvy he brings to the table, his willingness to engage physically and ability to eat minutes in almost every situation and it is pretty hard to not like the signing.

After watching the likes of Tom Renney and Ralph Krueger struggle to find six legitimate NHL D-men to dress on a nightly basis for the last two seasons, it looks as though Eakins will have far more to work with. With Anton Belov, Denis Grebeshkov, Corey Potter, Philip Larsen and Nick Schultz set to battle for a spot on the Oilers final pairing, depth shouldn't be a concern.

Inserting Ference into Edmonton's top four doesn't help address their need for a legit #1 or #2 blueliner but it most certainly should allow the Oilers rookie coach to lighten the load on the trio of Jeff Petry, Justin Schultz and Ladislav Smid. Most see the newcomer landing next to Schultz and helping the youngster along the way during his sophomore campaign. However in my mind, the better fit might be playing him alongside Petry.

With the twenty-five year old about to enter the final year on his current deal, he needs to show management what direction his career is headed. Sliding a guy like Ference next to Petry and making them Edmonton's "tough minutes" pairing, might be exactly what the the American needs to kick start his game.

The Smid-Petry duo showed they were in over their heads as the Oilers "1A" pairing in 2013 and thinking that will somehow change in 2013-14, would be a mistake. When initially paired with Petry, Smid was exactly what the doctor ordered but the Czech rearguard is better suited in a second pairing role. Also, who's to say he doesn't do the same for Schultz, that he did for Petry?

Regardless of what direction the club ultimately decides to go, the "attitude" Ference brings to the table will be an absolute godsend. Let's be honest here, we are not only talking about the Oilers adding an experienced blueliner but one that is coming from a winning culture. He has been to the Stanley Cup Finals in two of the last three years and played a key role on a damn good Boston Bruins team.

That in itself, could be worth the supposed risk some feel Craig MacTavish took in signing Andrew Ference to a long term deal. Bringing back that "winners mentality" back to the Alberta capital would frankly be priceless.