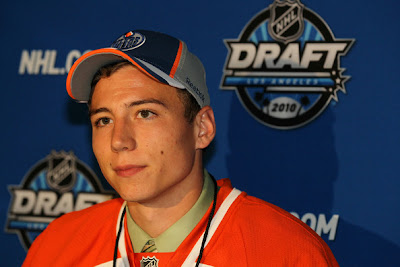 Fast forward three short years and suddenly the kid from Minneapolis is looking like a bust in the eyes of many. While he has showed little during his first two seasons in the American Hockey League, the kid has had his share of obstacles to overcome. Like many a player before him, Pitlick struggled mightly with the adjustment of having to  play against grown men on a nightly basis and to make matters worse, he has been hit by the injury bug.

Add to that to the lack of opportunity since joining the Oklahoma City Barons and that stat line of 10 goals and 38 points in 106 games, isn't overly shocking. Prior to the 2010-11 campaign, Steve Tanbellini and company decided they wanted to start changing the "losing culture" within the organization and the easiest way to accomplish that, was by bulking up with talent on the farm.

In came the likes of AHL vets Alex Giroux, Colin MacDonald and Brad Moran, as well as the addition of European talent such as Teemu Hartikainen and Linus Omark. The trend continued in 2011-12, which was Pitlick's first year with OKC, as they added Josh Green and Ryan Keller but also handed out regular minutes to a pair of Swedes in Anton Lander and Magnus Paajarvi.

It would only get worse in 2012-13 with the NHL Lockout, as the former Medicine Hat Tiger was relegated to fourth line duty, as the trio of Jordan Eberle, Taylor Hall and Ryan Nugent-Hopkins toyed with AHL opponents for a few months. Not long after their departure, Pitlick wrecked his knee and was once again on the outside looking in.

To say it has been rough for the twenty-one year old over the last couple of years, would be an understatement but to be perfectly honest, expectations are no longer what they once were. After being selected in 2010, most felt Pitlick could be a possible nice fit behind Sam Gagner as the Oilers future second line centre.

With Edmonton's inability to make any sort of progression up the NHL standings, the organization were not only able to add two more first overall selections in Nugent-Hopkins and Nail Yakupov but also traded away Paajarvi, to the St. Louis Blues, in exchange for winger David Perron.

The need for Pitlick to come in and be some sort of point producer at the NHL level, is simply no longer there. Does it suck that he hasn't been able to score in the farm? Sure but what the Oilers ultimately need him to become, is a solid bottom six forward. If he can, 1) stay healthy and 2) gain some confidence, there is no reason to think he can't become an effective third/fourth line guy.

He has the size at 6' 2" and nearly 200 pounds to create space for both himself and his linemates. The kid does possess  a helluva shot, though he has rarely found the back of the net as a pro, and skates pretty darn well. Heading into his draft year, Pitlick was considered to be a player with a good work ethic and always looked to improve his game.

In my opinion, that drive still exists but his confidence is surely at an all time low.

If I had my druthers, Pitlick would start the 2013-14 campaign in Oklahoma City on a line with Lander, with the duo being played in all situations. Whatever unit head coach Todd Nelson decides to use Mark Arcobello on, automatically becomes the Barons top line. Leaving the heavy lifting for Lander and Pitlick. If all goes well, both could see time in Edmonton but come 2014-15, they should make up two-thirds of the Oilers fourth line.

They are entering the final year of their Entry Level deals and hoping to secure a spot in the NHL. With the likes of Devan Dubnyk, Nugent-Hopkins, Jeff Petry and Justin Schultz all needing new deals prior to '14- '15 and Yakupov only a year behind, money is going to get tight in the Alberta capital...and in a hurry.

Signing the Boyd Gordon's of the world to a $3 million ticket is something general manager Craig MacTavish will simply be unable to do over the next few seasons. This franchise needs players like Anton Lander, Tyler Pitlick and even Will Acton, to show they are ready for prime time duty.

They may not be called upon to play "key roles" but their presence alone, should allow MacT the ability to keep the core group of this team intact...for as long as he sees fit.
Posted by Oil Drop at 10:57:00 am