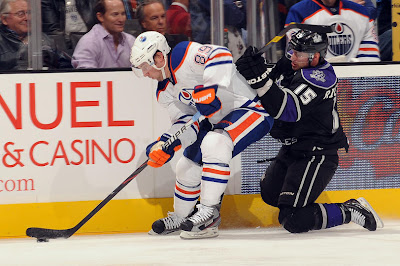 There is no questioning the twenty-four year old's grit, determination and want to win but putting the pressure of wearing the "C" on a team that has missed the playoff for seven consecutive years, could turnout to be disastrous for good ol' #89.

While Gagner is coming off what was easily the best year of his NHL career, at least from a points standpoint, let's be serious. Despite having six years under his built, he is still trying to find his game at this level and continues to be a liability in his own end of the rink. Should the plan not be for the kid to try and take another step forward in his development in 2013-14?

After signing a three year extension to remain in Edmonton, the time has come for the former London Knights standout to turn into a consistent 50-60 point guy. This team can not ill afford to have Gagner skating around the rink trying to do too much and finishing the year off with another forty point campaign. His focus needs to be on becoming a better all around player, not dealing with the day-to-day pressures of being a National Hockey League captain.

Make no mistake, Gagner is one of the young leaders of this group but that doesn't mean he needs to wear the "C". In my mind, Taylor Hall is the future captain of this team but as I said earlier this summer, the organization should be in no rush to hand over the captaincy to the former first overall pick.

As I see it, they have two real choices heading into this season.They either name Andrew Ference and have him run with it for a year or two or they go captainless and go with the quartet of Jordan Eberle, Ference, Hall and Ladislav Smid as alternates and give it someone on a permanent basis prior to 2014-15. That simple.

Should they decide they want to give it to Gagner after he puts together a solid season in 2013-14, have at it. Perhaps they look towards Ryan Nugent-Hopkins as a possibility or they simply settle on one of the previously mentioned names. Whatever the case, the decision does not need to be made now and it certainly should not end up with Sam Gagner being named the next captain of the Edmonton Oilers in the here and now.
Posted by Oil Drop at 11:32:00 am