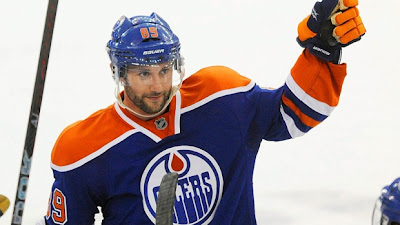 The moment Sam Gagner agreed to his 3 year/$14.4 million deal to remain with the Edmonton Oilers, expectations for the former sixth overall pick changed. While he did leave some term and money on the table in signing an extension with the Oilers, it is not as though the twenty-four year old will be making chump change durng the upcoming 2013-14 campaign.

With a cap hit of $4.8 million tagged to his name, the pressure will be on #89 to not only produce points at consistent rate but also take his overall game to a completely different level. Outside of goaltender Devan Dubnyk and possibly blueliner Jeff Petry, who are both entering the final year of their current deals, Gagner is likely next in line for players on the hot seat starting October 1st.

Coming off what was easily the most consistent year of his career, at least from a point production standpoint,  Sam will need to do more of the same this season but also show marked improvement in other areas of his game. The days of Gagner gliding back into his own end with no real purpose, have to become a thing of past.

He can no longer just think about putting up points and simply dismissing his other responsibilities on the ice. Be his less than stellar play in the Oilers half of the rink or his tendency to take some abnormally long shifts on an almost nightly basis. Whatever the issue, improvement needs to be made and in a hurry.

By the sounds of what we are hearing come out of the mouth of new head coach Dallas Eakins, this team will be expected to win games from the outset. The excuses of being a young team or one that is in transition will no longer be accepted. The time for winning hockey games is now at hand and in order for the Oilers to have any hope of achieving that goal, the kids will need to make a adjustments to their games.

In today's NHL, there are very few players who are given top six minutes at centre, that can not play a 200 foot game. Some people may not want to hear it but it is fact. While the likes of Jordan Eberle, Taylor Hall and Nail Yakupov have to commit to improving on the defensive side of their games, as wingers they are allowed to take far more risks to try and create something upfront. That simple.

Edmonton already has one of those guys in place with Ryan Nugent-Hopkins but in order to see this group make any sort of marked improvement up the Western Conference standings, Gagner will need to do the same. Despite putting up decent point totals during the abbreviated 2013 campaign, one could argue the former London Knights standout took a step back in other areas of his game.

In his defence, babysitting a guy like Yakupov on his line for much of the season probably didn't help but he continued to demonstrate his usual shortcomings away from the puck. Also, after showing a slight improvement in the face-off circle during 2011-12, he reverted back to his typical sub 44% level in the dot. Not exactly positive signs o neither front.

That said, with the addition of David Perron into the mix via a trade with the St.Louis Blues and Ales Hemsky apparently set to start another season in Orange and Blue, the Oilers haven't had this much fire power upfront since their glory days. Scoring goals shouldn't be a problem for this team, meaning Gagner may finally post a 50 point season.

Remember those expectations I was talking about earlier? Well as a near $5 million player, a 45 point season will no longer be acceptable. If he were to take a step forward in the areas he is lacking, my guess is coach Eakins and company would be just fine with a 50-55 point season. However, should the same issues continue to linger, than Gagner will need to push the 70 point plateau, to help off-set his other on ice deficiencies and make his contract worthwhile.

The one word Dallas Eakins constantly uses when it comes to describing what he expects from each and every player on this roster is "compete". Over the best number of years, you could count how many guys competed as hard as Sam Gagner on one hand. That says a lot about the player and, unfortunately, about some of the guys former general manager Steve Tambellini brought to town over the years.

Heading into camp, Gagner is saying all the right things and is talking about making the playoffs for the first time since joining the Oilers in 2007-08. No one could ever question the kid's want to win and for his team to be successful. Having said that, it is now up to him to prove he is willing to make whatever sacrifices are necessary to help his team get over that hump. One thing is clear, the organization is expecting him to do just that.