With or without RNH, Hall needs to be left on the wing 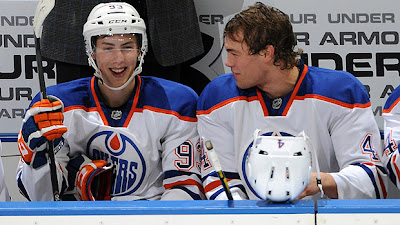 When Edmonton Oilers general manager Craig MacTavish speaks, the masses tend to listen. Unfortunately, sometimes people tend to hear what they want to hear. After seven long years of watching this team lose night after night, most Oiler fans look for the negative in almost every situation. It might not be the best approach to take but it is more than understandable.

That said, when MacT replied to a question on whether or not the club planned on using Ryan Nugent-Hopkins during any of their seven exhibition outings with the following statement, the sky was already starting to fall for many throughout Oil Country.

"I would say absolutely not. At this point, talking to our medical staff, everything is on schedule but it's important for them, that we maintain the most pessimistic schedule we started with...which was November 1st."

The part most seem to ignore in that statement, "the most pessimistic schedule", is actually the most important part. Not sure about all of you but when I hear the word "pessimistic", I tend to think worst case scenario. So what exactly is everyone getting worked up about?

Is it because they don't plan on using him during the pre-season? In all honesty, if they had actually decided to go ahead and have him take part in any of Edmonton's exhibition games, I would have frankly been stunned. Outside of possibly their final game against Dallas, and even that would be a stretch, it would serve absolutely zero purpose. That simple.

Back in late July, I hinted at the distinct possibility of RNH being ready to go far sooner than most thought possible. Barring any setbacks, it looked as though the chances of him returning somewhere between October 1st to say October 17th, were fairly promising. As of this moment, that has not changed.

In a perfect world, Nugent-Hopkins would be playing from Game 1 but should he need a little extra time, don't be surprised to see him sit out the opener against the Winnipeg Jets and Edmonton's following game on October 5th, against the Vancouver Canucks.

That would give #93 an additional a week to prepare for his return to the lineup and also keep him away from having to face a team like the Canucks in his first game back. From the info that was passed on to me in July, somewhere between their October 7th contest with the New Jersey Devils and their date with the New York Islanders on October 17th, seemed to be the likeliest of time frames for the Nuge to make his return.

Again, barring any sort of setback, we are talking about the kid probably; missing somewhere in the neighbourhood of seven or eight games. Making this notion of the club possibly considering using Taylor Hall at centre to start the 2013-14 campaign, simply baffling. Rumour has it, that someone within the organization had let the star winger know he could see time down the middle, should Nugent-Hopkins not be ready to go.

While I understand the mindset of having Hall take a few twirls at centre in the short term, having your best player playing out of position to start the year makes no sense. We are talking about moving one of the premier wingers in the game today, on a team that already has more than its fair share of question marks, when using the likes of a player like Mark Arcobello is staring them in the face.

Please...someone clue me in on how this is a good idea?

Is Arcobello an NHL player? Probably not but for a few weeks, my guess is he can more than hold his own in a top six role. Also, is there any particular reason as to why Hall is the one being asked to make the shift? He has repeatedly said he will play wherever the team needs him but has made it very clear he would rather stay on the wing. The most recent occasion being last week, following his GM's media scrum during the 2013 Young Stars Tournament in Penticton, British Columbia.

"I haven't played a full season at centre since minor hockey, It's still a little familiar to me but I would like to play wing. I'm probably better but it's something I am going to have to get used to and if the team needs me to play there, than that's what I'm going to have to do."

Not exactly a ringing endorsement from the former first overall selection, who has to be tired of fielding questions of shifting to centre. This has been going on for the better part of two years, in one form or another, and it's frankly ridiculous. Hall is arguably as good a left winger as there is in the NHL and the fact talk surrounding him being moved continually keeps coming up, is a major fail on the part of the organization.

I am all for Hall getting comfortable in the face-off circle and helping lighten the load on Nugent-Hopkins and his surgically repaired shoulder. Being saying as much for months and still believe its the way to go. Having him help[ out in the dot is one thing but to start your season with arguably your two most important players either out of the lineup or out of position, is asking for trouble.
Posted by Oil Drop at 3:36:00 pm