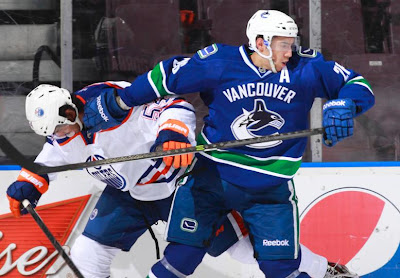 Despite coming out with what was easily their finest outing of the tournament, the Edmonton Oilers rookies finished off their appearance at the Young Stars Classic in Penticton, British Columbia in the same fashion it started. Sacha Guimond scored the eventual game-winner on a third period two-man advantage, as the Vancouver Canucks rallied from two goals down, earning the 5-2 victory and in turn handing the Oilers their third consecutive loss.


Second round pick Marco Roy was by far and away the Oilers most dangerous player on the afternoon, scoring his first of the tourney, while starter Franky Palazzese was solid in between the pipes, stopping thirty-five of the thirty-nine pucks fired his way. However, in the end it was Edmonton's inability to create any sort of consistent offensive pressure that did them in.

Unlike their previous two outings, the Oilers managed to not put themselves behind the eight ball early, playing Vancouver to a scoreless opening period. Considering Todd Nelson's crew had found themselves on the wrong side of 3-0 first period scorelines against both the Calgary Flames and Winnipeg Jets, Sunday afternoon's 0-0 opener was a marked improvement.

Roy would actually give them their first lead of the tournament, as his wraparound attempt bounced off a Canucks defender and past Mathieu Corbeil early in period two. Just over two minutes later, the would make it a two goal bulge, as Kyle Platzer picked up a juicy rebound and chipped home his second of the tournament, up and over a helpless and out of position Corbeil.

With a 2-0 lead and just over half the game to play, it looked as though the Oilers had a real shot of at least heading back to Edmonton on a winning note. Unfortunately for them, that would not be the case.

Just past the midway point of period two, the Canucks would strike twice in under a minute, as Philippe Maillet and Cole Cassels scored fifty-nine seconds apart to erase the two goal deficit. From that point on it was all Vancouver. What had been a relatively evenly played game for thirty minutes, suddenly turned into an all out onslaught on the Oilers goal.

Guimond would give the Canucks their first lead of the day, wiring home an absolute laser past Palazzese at the 10:29 mark and Edmonton down a pair of skaters. In the Oilers defence, Darnell Nurse was somehow handed an extra minor penalty following a fight between Travis Ewaynk and Zach Hall, despite a Canucks player jumping in as the third man into an altercation. It was a bad break for the visitors but one Vancouver wasted little time taking advantage of.

Alex Friesen would put this one out of reach late in the frame, deflecting home Guimond's point shot to make it 4-2. Wesley Myron added an empty netter to close out the scoring and send the Oilers back home with an 0-3 record, after being outscored at the tournament by their opposition to the tune of 17-6. One word sums it up best...UGLY!!!