Could Phaneuf be the Oilers man? 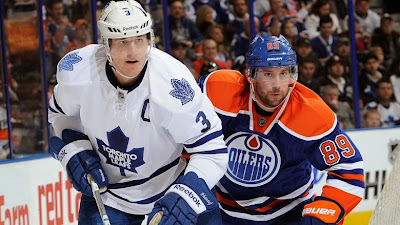 There is no questioning what is currently the biggest issue with the Edmonton Oilers. Above all else, their lack of a legitimate top pairing NHL defenceman is painfully obvious. They have some very nice pieces already in place, see Jeff Petry, Justin Schultz and Anton Belov, with the likes of Oscar Klefbom and Darnell Nurse waiting in the wings.

That said, the Oilers current blueline is arguably as bad as it has been at any point during the last eight years. The mix is downright awful and while the organization is well aware of their shortcomings, addressing it could prove to be rather difficult. There are so few #1 defencemen out there, that acquiring that "stud" could be nothing more than a pipe dream.

Grabbing a guy like PK Subban or Shea Weber would certainly solve the problem but pulling off such a trade would seem to be highly unlikely. That said, Edmonton could possibly make themselves a far more attractive destination for the Canadiens star blueliner to sign a long-term extension, should they go out and grab his younger brother Malcolm from the Boston Bruins but that is a discussion we will leave until tomorrow's piece.

Trading for an elite defenceman would prove to be rather costly and by the sounds of it, Craig MacTavish doesn't have the appetite for moving one of his star young players...never mind the possibility of coughing up a couple of his so-called untouchables. With that being the case, they will have to likely settle for trying to find a player that falls somewhere in the next tier or two of NHL defencemen.

As of late, the name that has been coming up more than most is the Buffalo Sabres Christian Ehrhoff. While the thirty-one year old has carved himself out a very nice career as a #2/#3 defenceman, asking the former Vancouver Canuck to lead what everyone expects to be a playoff team in 2014-15, could be a bit of a stretch.

Has he been good in Buffalo as the top dog? Sure but the Sabres have missed the playoffs each and every year since his arrival via free agency, prior to the 2011-12 season. It's one thing to play top pairing minutes on one of the league's bottom feeders but it is another animal altogether when you do it for a contending team. To this point, Ehrhoff has yet to show he is capable of pulling that off.

Would the talented German blueliner and his $4 million cap hit for the next seven years be a decent consolation prize? It certainly would be but it also falls short of addressing this roster's primer need on their backend. Now should MacT add an Ehrhoff and say the Philadelphia Flyers Braydon Coburn in two separate transactions, that would be another matter altogether.

Bringing those two on board would drastically upgrade the Oilers top two pairings but on their own, would not be nearly enough to make much of a difference. However, how different would Edmonton's defence look with Coburn and Toronto Maple Leafs captain Dion Phaneuf added into the equation? It would quite literally, kill two birds with one stone.

For a defence core that has absolutely zero bite to it, with the possible exception of Andrew Ference, the duo of Coburn and Phaneuf would address that immediately, while adding two more puck-moving defencemen into the stable. There would be absolutely no rush for the Oilers to try and finalize a deal with the Flyers until the off-season for the 2003 eighth overall pick but that would not be the case when it comes to the Leafs #1 guy.

It's no secret Toronto is trying to ink the former ninth overall pick, ironically from the same 2003 draft class, to a lengthy extension but apparently the two sides are fair distance apart. Phaneuf is not only looking for money that GM Dave Nonis isn't overly comfortable dishing out but also a term he is even less thrilled about. At twenty-eight years of age and coming off a six year pact that saw him pocket $39 million, the Edmonton native will be looking for an even bigger number this time around.

Should the two sides hit an impasse, MacTavish would be wise to enquire about the potential cost of acquiring the former Calgary Flames standout. Edmonton would have an attractive piece to dangle in what looks to be a possible lottery pick at the 2014 draft, one of their young forwards and possibly Jeff Petry.

Toronto would undoubtedly want a D man in return and with Justin Schultz going nowhere, the Oilers would have to seriously consider moving the twenty-five year old in a possible package. Petry has arguably been Edmonton's best D man for two year's running but top pairing defencmen don't grow on trees. You generally have to pay a hefty price to acquire one.

Obviously the Oilers would never make such a move unless they had an extension in place for Phaneuf but if  MacTavish were able to bring him and a guy like a Coburn on board, Edmonton's top six would take on a completely different look. Unfortunately for MacT and company, good ol' Dion's departure would create a rather massive hole on the Leafs blueline, making the likelihood of Nonis moving his top defenceman a rather risky, if not catastrophic, proposition.

Regardless of what route the Edmonton Oilers decide to go, one thing is abundantly clear. They won't have much in the way of willing dance partners, when it comes to legitimately trying to improve their blueline in the immediate future. A scary thought indeed but ultimately one that Craig MacTavish will have to find a way to address or this team will simply continue to spin their wheels.
Posted by Oil Drop at 3:43:00 pm