Oilers forget to show up in Columbus 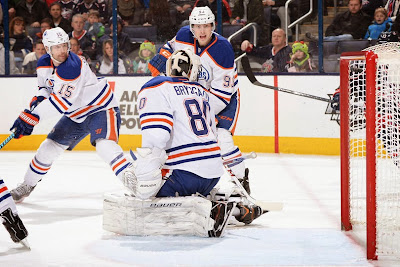 Less than 24 hours after putting together what was easily their finest defensive performance of the season, the Edmonton Oilers proceeded to lay an egg on Friday night, falling 4-2 to the Columbus Blue Jackets.

After earning a shutout the previous night in Nashville, netminder Ilya Bryzgalov lasted all of forty minutes, allowing four goals on twenty-three shots before being replaced by Devan Dubnyk to start the third period. Sergei Bobrovsky was solid in between the pipes for the Jackets, stopping twenty-seven of twenty-nine pucks fired his way, while Ryan Johansen led the charge upfront with a goal and assist.

Despite playing their most ineffective game in some time, two thirds of the Oilers top line did manage to extend their point streaks in what was yet another losing effort. While Taylor Hall was held off the scoresheet for the first time in six games, both Ryan Nugent-Hopkins and Jordan Eberle picked up assists to push their individual streaks to five and six games.

As if being dominated by Columbus wasn't bad enough, Edmonton lost centre Boyd Gordon midway through the game with an apparent shoulder injury. For the club’s sake, whatever the injury, it had better not be anything overly severe. Of all the Oilers players upfront, the one Dallas Eakins can simply ill-afford to lose, for any period of time, is Gordon. There is no one currently on this roster that can do what the veteran pivot does. Plain and simple. Without #27, this team is in deep trouble.

Edmonton was handed a glorious opportunity just twenty seconds in, as Boone Jenner took an ill-advised interference penalty on Jordan Eberle. Unfortunately for Dallas Eakins, his side came out as flat as a pancake and did absolutely nothing with the early man advantage.

After being lit up for three power play goals at Rexall Place just ten days earlier, the Blue Jackets appeared to gain a ton of confidence from shutting down what had been a red-hot Oilers power play. From that point on Columbus was the better team and were rewarded for their hard work with the game’s opening goal at the 7:50 mark.

Johansen snapped home his third goal in as many games, after Cam Atkinson stripped Nugent-Hopkins deep in the Oilers zone, beating Bryzgalov high to the blocker side with just a perfect shot under the crossbar. Columbus instantly came to life and Edmonton had no response.

Despite accomplishing next to nothing over the opening twenty minutes, the Oilers were a shot away from being back on level terms. However that would quickly change, as the visitors ran into penalty trouble early in period two. A trio of minor penalties to Nick Schultz, Jeff Petry and Andrew Ference not only put the visitors down a pair of skaters for an extended period of time but also removed their top three penalty killers along the blueline.

Not surprisingly, the Jackets would convert on the power play, as Artem Anisimov redirected home Matt Calvert’s goal mouth pass to make 2-0 for Columbus. They would extend their lead to 4-0 before the period was out, as Nick Foligno and Jack Skille made sure Bryzgalov would be starting the third period on the bench.

The Oilers would mount a minor comeback over the final ten minutes of the third, as both Sam Gagner and David Perron would sneak pucks behind Bobrovsky to make it a 4-2 game. After coasting through much of the first fifty minutes of play, Edmonton decided to turn it on when it no longer mattered.

While Perron’s goal did come on the power play, it was the Oilers lack of overall effort and losing the special teams battle that ultimately killed them in this one. They were a disappointing 1-for-7 on the man advantage, while coughing up a pair of power play markers on the Blue Jackets five opportunities.

Just when you thought this team was about to turn the corner and start playing a more consistent brand of hockey, they come out and deliver a performance like that. One really has to wonder what it will take for this group to come to the realization that showing up and giving it the old college try, simply isn’t good enough.
Posted by Oil Drop at 8:41:00 am