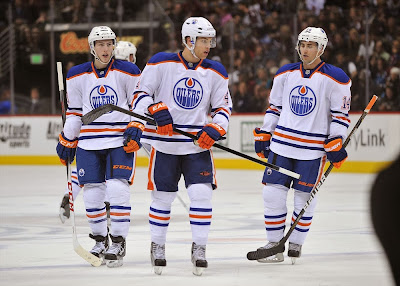 After struggling through much of the opening month and half of their 2013-14 campaign, the Edmonton Oilers took full advantage of a soft spot in their schedule to turn their early season misfortunes around. A trio of games against the Calgary Flames, Columbus Blue Jackets and Florida Panthers could not have come at a better time. That said, one could say the same about Dallas Eakins' decision to reunite the line of Jordan Eberle, Taylor Hall and Ryan Nugent-Hopkins.

The Oilers showed signs of coming to life midway through their 3-1 loss to the San Jose Sharks and not surprisingly, that was the game in which Eakins decided to put his top line back together. During Edmonton's recent three game win streak, the trio of Hall-RNH-Eberle have combined for fourteen points and have once again become the focus for teams facing the Oilers on any given night.

Some may look at that approach as putting all your so-called "eggs in one basket" but in reality, it is the complete opposite. By forcing the opposition to deal with a legit top line, hypothetically, it should free up their second and third lines to produce more against weaker competition. Three games into the revamping of the lines and few could complain with the results.

That adds up to thirty-six points in three games...not too shabby at all.

Sure the Oilers production on the man advantage has played a big part in their turn around but those are the same players being used inside Edmonton's top nine forward group. Through much of this season, this club's offensive production has been scattered at best and Eakins has taken to pulling out the ol' blender on an almost period by period basis.

In his defence, the rookie coach has had a ton of injuries and slumping players to deal with but at some point going back to something that has proven to work in the past, seemed to be a no-brainer. Spreading the wealth is all well and good but considering this club's struggles to put pucks in the net, one has to wonder why it didn't happen sooner.

Unlike last season, Edmonton is better equipped to make teams pay for trying to take Eberle, Hall and the Nuge out of the equation. The addition of Perron and Gordon to the supporting cast, has given this team depth upfront they haven't seen in ages. That said, until recently, we have not seen any of that come to fruition...albeit for a variety of reasons.

From a a playoffs standpoint, this year is all but over. However, the time has come for this group to take a legitimate step forward. Be it from a maturity level in their overall game or simply on-ice results. With that being the case, barring some sort of major shakeup in the foreseeable future, using the trio of Jordan Eberle, Taylor Hall and Ryan Nugent-Hopkins as the Edmonton Oilers top line has to be priority one. Period.

All three guys prefer playing with one another and the numbers say they should be left together. Last time I checked, most successful teams have a go to line they turn to in a time of need or when the game is on the line. Whereas Edmonton seems far more concerned in a building a "balanced attack".

Why not just stick with what works? Good question and hopefully from this point on, it will become a question no one will need to ask ever again.
Posted by Oil Drop at 10:44:00 am