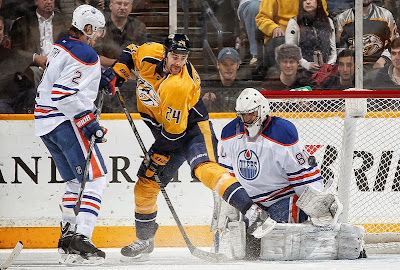 Let’s be honest. Could either Ilya Bryzgalov or the Edmonton Oilers organization have asked for a better outcome from the veteran goalie’s debut performance in Orange and Blue? Frankly, it would seem almost next to impossible to see how that would even possible.


On the strength of a 33 save performance from Bryzgalov and three goal effort from the trio of Jordan Eberle, Taylor Hall and Ryan Nugent-Hopkins, the Oilers managed to pick up their fourth win five tries, blanking the Nashville Predators by a score of 3-0 in Thursday night NHL action.  Edmonton’s top line continued their recent hot-streak, picking up another five point night between the three of them.

The evening also marked the long-awaited return of centre Mark Arcobello and, to a lesser degree, winger Ryan Jones to the lineup, after both sat out the Oilers previous five games. The duo replaced Will Acton and Luke Gazdic on Dallas Eakins’ fourth line against the Preds and while neither managed to find the scoresheet, they fit in quite nicely on a line with Jesses Joensuu.

After getting through what was a rather uneventful opening twenty minutes of play, as both sides checked each other to a standstill, it was a pair of unsportsmanlike conduct penalties to Paul Gaustad and David Perron at the 5:07 mark of period two, that would completely change the complication of this one.

It would take Edmonton all of twenty-five seconds to use the four-on-four matchup to their advantage. Jordan Eberle would get the whole sequence started, stealing the puck off Roman Josi deep in the Nashville zone and promptly finding a wide open Jeff Petry at the far right point. The Oilers blueliner would make no mistake, hammering an absolutely gorgeous slap/pass to a charging Ryan Nugent-Hopkins for as easy a tap in goal that you will ever see.

The goal ended a six game goal-less drought for the Nuge but it would also extend his current point streak to four straight. Since being reunited with Eberle and Hall on the Oilers top line, RNH has posted seven points over his last five games.

They would double their lead all of fifty-one seconds later, as Hall would put the finishing touches on a two-on-one break with Sam Gagner, sliding home his seventh on the year between the wickets on rookie starter Marek Mazanec, with an absolutely splendid move in tight. In a blink of an eye, a scoreless game turned into a two goal cushion and the Oilers rookie bench boss could not have been happier.

From that point on, both teams would exchange the occasional chance but for the most part, Edmonton shut the Predators down. Nashville would keep firing pucks Bryzgalov’s way but to the Oilers credit, the majority of those were kept to the outside, with next to no second shot opportunities.

That said, the former Phoenix Coyotes standout was called upon in the third period to make a pair of point blank stops off Mike Fisher and Oilers killer Matt Cullen but the Russian guardian was more than up to the task. Much like his relief performance against the Chicago Blackhawks on Monday night, there was nothing over flashy about Bryzgalov’s game but he was very effective.

He was positionally sound from start to finish. He gave up next to no rebounds over the entire sixty minutes and as previously mentioned, it was pretty much one and done for the Preds for much of the evening.  Bryzgalov looked calm, cool and collected from the moment the puck was dropped and never wavered once.

Eberle would close out the scoring with just under a minute to go, firing his ninth of the season into an empty net to make it a 3-0 final and send the Oilers off to Columbus on a winning note.  Like Nugent-Hopkins, both Eberle and Hall have produced seven points since being reunited with RNH and are currently riding a five game point streaks.

It will be a rather quick turnaround for Eakins’ crew, as they take on the Blue Jackets Friday night to complete their back-to-back set. Considering Edmonton humiliated this same side just over a week ago at Rexall Place to the tune of 7-0, something tells me Columbus will be more than ready for what could be a weary Oilers squad.

One would generally expect Edmonton to go with Devan Dubnyk in their second game in as many nights but don’t be surprised to see #80 back in between the pipes for the men in Orange and Blue. Considering Bryzgalov has been waiting for his kick at the can for well over a week and hasn’t exactly been overly active during the first month and a half of the season, my guess is he would like nothing more than to make his second start in as many nights.