Oilers find themselves in familiar territory 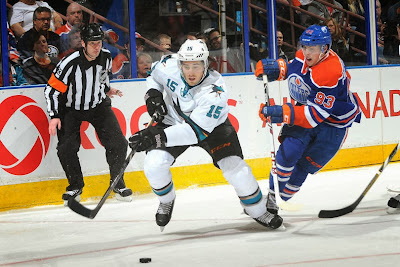 Thanks to their usual poor start on home-ice, the Edmonton Oilers continued on their losing ways on Friday night, dropping a 3-1 decision to the San Jose Sharks and falling into the basement of the National Hockey League standings.

Nail Yakupov did manage to finally put an end to the Oilers 214:52 scoreless drought on home-ice with a second period power play marker but it wasn't nearly enough to keep Edmonton from dropping to 1-9-1 over their last eleven outings.

Devan Dubnyk managed to keep Edmonton within striking distance with a thirty-four save performance, using the good fortune of the Sharks hitting four goal posts to his advantage. While his personal record fell to an ugly 3-10-1, Dubnyk has started to show signs of perhaps shaking off his season long struggles.

The Oilers did give San Jose all they could handle during what was a highly entertaining second period, as the two sides went end-to-end for much of the middle frame. Problem being Dallas Eakins' crew were already down 3-0 before they started playing their game.

Not exactly the most positive sign in the world but when your sitting in thirtieth place in a thirty team league and are the owners of a 4-15-2 record, you have to start somewhere.

Joe Pavelski opened the scoring late in the first, pouncing on a loose puck and firing home his seventh on the campaign with the Sharks on the man advantage. They would extend their lead before the period was out, as Joe Thornton found a wide open Tomas Hertl for an easy tap in, thanks to a brutal giveaway by defenceman Corey Potter. The goal was the youngster's twelfth of the season, as he continues to be the runaway leader among all rookie skaters in both goals scored and points.

Patrick Marleau would make 3-0 at the 3:45 mark of period two, with what honestly seems like a guaranteed goal night whenever the Sharks make a trip out to Rexall Place. Edmonton's fourth line of Will Acton, Ryan Jones and Jesse Joensuu got caught on the ice against the Thornton line and the veteran duo had no trouble converting a three-on-two break into San Jose's third goal in just over eight minutes.

The Oilers looked to have finally ended their rather lengthy scoreless streak on home ice just before the eight minute mark but Ryan Smyth somehow missed a wide open net on a wrap around. Thankfully the streak would come to an end a few minutes later, as Yakupov hammered his third of the season past Sharks starter Alex Stalock with Brad Stuart off for cross-checking.

While the former first overall pick has had his fair share of challenges to deal with during his sophomore season, he has now scored in two of his last three outings and currently leads the team with three power play goals on the season. Again, it may not seem like that big of a deal in the grand scheme of things but at the moment, it's all about taking baby steps with this team.

In what was a bit of a curious move, Eakins decided to scratch Mark Arcobello from his starting lineup, despite being tied for third in team scoring. To confuse matters further, they actually ended up sending him down to Oklahoma City prior to the game, as the club re-called defenceman Oscar Klefbom. With Justin Schultz unable to play due to a groin injury and with another blueliner apparently having picked up a knock, the Oilers were in need of another defenceman.

By the sounds of it, the Arcobello move appeared to be nothing more than a paper transaction to allow the Oilers the ability to call Klefbom up. He could even be back on the active roster for Saturday night's tilt with the Calgary Flames but the fact they decided to "send" him to OKC, when they could have just as easily done the same thing with Will Acton, was and remains rather perplexing.

For a team that is not only having trouble putting pucks in the net but also keeping them out of their own, scratching arguably one of their best all around forwards through the first twenty games of the season made absolutely zero sense to begin with.
Posted by Oil Drop at 11:19:00 am