Fans treated to a classic on Teddy Bear Toss Night 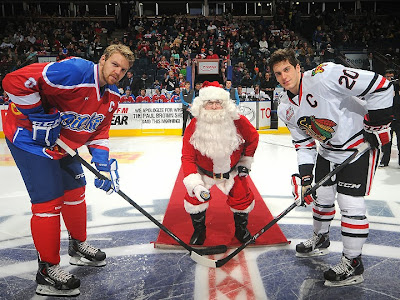 It was a very special evening in the Alberta capital on Friday. Not only was it the Edmonton Oil Kings annual Teddy Bear Toss Night but it was also a rematch of the last two Western Hockey League Champions.


Despite a late third period collapse, the Oil Kings still managed to send everyone home happy edging the Portland Winterhawks 5-4 in what was a thrilling evening of hockey at Rexall Place. Forward Reid Petryk scored what turned out to be the eventual shootout winner and Tristan Jarry stopped two of three Winterhawks shooters he faced, as Edmonton moved into top spot in the Central Division with the win.

With the building a buzz and awaiting the opportunity to send thousands of teddy bears to the playing surface,   Portland came out like a house on fire. Not surprisingly, the Winterhawks would open the scoring at the 4:43 mark, as Nic Petan made a gorgeous move in tight on Jarry before sliding home his twentieth of the season.

Despite being outplayed for the majority of the period, Edmonton would get back on level terms with 4:40 to go, as Dysin Mayo’s harmless looking point shot found its way into the back of the Winterhawks net. As big that goal was for the Oil Kings, it was even bigger for those less fortunate in the greater Edmonton area and queuing a rainfall of Teddy Bears.

With temperatures in Edmonton hitting a bone chilling -30 C for much of the day, over 10,000 fans decided to brave the weather and not only support their team but also help out Santas Anonymous collect thousands bears for under privileged kids throughout the city. Kudos to all of you for making sure this would still be a special night…even though Mother Nature was doing her very best to interfere.

Upon returning to the ice to complete the final four plus minutes of the first period, Portland continued to carry the play. If not for a huge stop from Jarry off Chase De Leo on yet another odd man rush, Edmonton would have found themselves behind after one.

Derek Laxdall’s side would finally start to turn the tide early in period two and they would be rewarded with the good ahead goal just over eight minutes in. Cody Corbett ripped home his ninth of the season past Brendan Burke, in what has been a break through campaign for the soon-to-be twenty year old American blueliner.

With their first lead of the night in their back pocket and all the momentum on the side, Oil Kings Mitch Moroz would bring the crowd to their feet with a monster hit on Portland’s Alex Schoenborn and keep them standing in what was a spirited tilt with defenceman Anton Cederholm.

No question the Winterhawks were the better team after twenty, as the 12-4 advantage on the shot clock might suggest, but Edmonton stormed back to grab a 21-18 advantage after forty. With twenty minutes to go, the game was there for the taking and it looked as though the Oil Kings had grabbed it by the throat.

Curtis Lazar would extend the lead to a pair wiring his eighteenth of the year through Burke, after a great rush up ice and a nifty little drop pass from Edgars Kulda. With just over thirteen minutes to go, this one looked to be in pretty good hands but the Winterhawks would not go quietly.

Defenceman Derrick Pouliot would cut the lead to one with just under five minutes to play, as the Pittsburgh Penguins prospect snapped a perfectly placed shot past a startled Jarry. It looked as though this one was headed for an interesting finish but Kulda would restore the Oil Kings two goal cushion less than a minute later, beating Burke high to the blockerside for his ninth of the campaign.

Give Portland credit, they would fight back yet again, as Taylor Leier potted his twenty-first with Ashton Sautner in the penalty box, to pull the defending champs back within one. That seemed to give the Winterhawks life, as they continued to press before Leier pounced on juicy rebound for his second goal in less than two minutes and with Burke on the bench for an extra-attacker.

In the blink of an eye, the trio of Leier, Petan and Pouliot went from being kept somewhat in check, to having eight points between them.  That said, there is a reason why Portland currently set atop the WHL standings and have not only two of the top three scorers in the league but four inside the top twelve.

Luckily for Oil Kings, they managed to get this one to a shootout, where Jarry made up for his earlier meltdown. While both Petryk and Moroz lit the lamp during the skills competition, Petan was the only shooter who could get one past the WHL’s Goaltender of the Month for November.
Posted by Oil Drop at 7:52:00 am