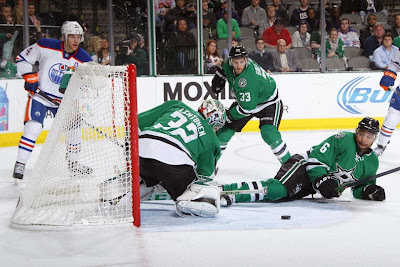 Last night’s 5-2 loss to the Dallas Stars was a perfect example, as the Oilers managed to cough up three early goals against on route to their fifth consecutive road defeat. Some will point to netminder Ilya Bryzgalov allowing three of the first eight shots he faced to get by him as the problem, which is fair point, but your goalie can only do so much.

Former Oiler Erik Cole opened the scoring all of fourteen seconds in, on what was simply an unfathomable breakdown that was helped along by Ryan Nugent-Hopkins wiping out in the Oilers zone. That said, it was one goal and with 59:44 left on the clock, righting the ship should not have been an issue…especially against a team on a six game losing skid.

However, instead of picking themselves up off the ice and finding their game, they proceeded to be nothing more than a train wreck in their own end of the rink. While Taylor Hall did manage to find a streaking Justin Schultz for an absolutely gorgeous equalizer at the 3:40 mark, it was a mere hiccup on the old radar screen.

Not surprisingly, they would give up two more goals before the period was out, the first of which Bryzgalov should have had, promptly putting them squarely behind the eight-ball heading into the first intermission. To their credit, Edmonton was the better team over the final forty minutes of play, though a mind-boggling blown defensive zone coverage, highlighted by yet another Sam Gagner head scratcher, would lead directly to Cody Eakin making it 4-1 game…just a 1:10 into period two.

From that point on, the Oilers took the play to the Stars but Kari Lehtonen stood tall in between the pipes. When he is on his game, Lehtonen is among the best in the business but it’s far easier to play goal when you’re staring at a three goal cushion.

Unfortunately, this has become the norm on far too many a night for Dallas Eakins’ side. Be it during the first, second or third period, this group has yet to find a way to come up with a sixty minute effort on a consistent basis and until that happens, we will continue to see what we saw last night in Dallas.

While the coaches and players try to mask this issue with the “we made “X” amount of mistakes and they all ended up in our net” approach, that isn’t addressing the problem. Mistakes happen in every game but more often than not, they seem to be happening to the guys in Oilers jerseys and not their opposition. Coincidence? Can’t see how it could be.
Posted by Oil Drop at 10:19:00 am