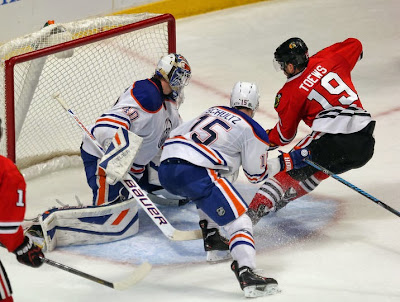 They may have had the Hawks number a few years back but yesterday’s 5-3 drubbing gave Chicago a clean three game sweep over the Oilers in 2013-14 and they have now taken five the club’s last six head-to-head meetings.

As of right now, Edmonton’s crew of youngsters is simply no match for the likes of Marian Hossa, Patrick Kane, Duncan Keith, Brent Seabrook Patrick Sharp and Jonathan Toews.

While Dallas Eakins’ side came out of the gate with a solid opening twenty minutes of play, the Blackhawks took it to a whole different level in period two. After exchanging first period markers, courtesy Ales Hemsky and Ben Smith, Chicago wasted little time in taking this one over.

The defending champs started coming in waves and there was seemingly nothing Edmonton could do to stop them. Andrew Shaw would give them their first lead of the night at the 2:36 mark with his twelfth of the season and fourth against the Oilers, beating Devan Dubnyk high to glove side to make it 2-1.

Despite being badly outplayed over the following nine minutes of action, the visitors would actually draw even, as Patrick Kane accidently put the puck in his own net on a delayed penalty call to the Oilers. The goal was credited to Boyd Gordon and one couldn’t help but think this might just be one of those nights for the men in Orange and Blue.

That feeling lasted all of twenty-nine seconds, as Hossa hammered home his seventeenth on the Hawks ensuing two man advantage. Just like that, Chicago reclaimed all the momentum they had just lost and Edmonton was back on their heels. Toews would close out the scoring in what was a rather hectic middle frame for the Oilers starting netminder, making what was simply a gorgeous move before sliding his seventeenth of the campaign under Dubnyk and into the back of the net.

In short, the second period was what has become your typical Chicago vs Edmonton period of hockey. The Hawks had the puck the entire time, building a rather healthy advantage on not only the scoreboard but also the shot clock. By the time the buzzer sounded for the second intermission, they held a 30-13 advantage, which included a 19-8 pasting in period two….and in all honesty, that was flattering.

Give the Oilers credit, the righted the ship to an extent over the final twenty minutes, as Taylor Hall would chip his eighteenth of the year past Antti Raanta, finishing off a lovely three way passing play which was orchestrated by Hemsky and defenceman Justin Schultz, to pull them back within one but they would get no closer.

Seabrook would close out the scoring with just over five minutes to go, as his point shot re-directed past Dubnyk, following an absolutely horrible clearing attempt from David Perron. Be it a terrible clearing attempt, an unwillingness to engage physically along the boards or just playing what appeared to be an overly tentative style of game, the Oilers didn’t do themselves any favours on Sunday night.

Oddly enough, four of their six defencemen actually had fairly decent showings, with the pairing of Jeff Petry and Martin Marincin leading the charge. However the same could not be said for veteran Nick Schultz and Anton Belov, who the Hawks had a field day with for much of the evening. That said, there was more than enough blame to go around.

The line of Hemsky, Gordon and Perron were by far and away Edmonton’s best, while the Oilers top two lines did show some flashes, much of it coming courtesy of #4, they were nowhere near good enough…in either end of the rink. They may have been able to sneak past the Pens but there is still a long way to go before this team finds their way.

That said, they didn’t quit and at this stage of the game, I am not so sure we can expect much more out of this group when they are up against elite competition.