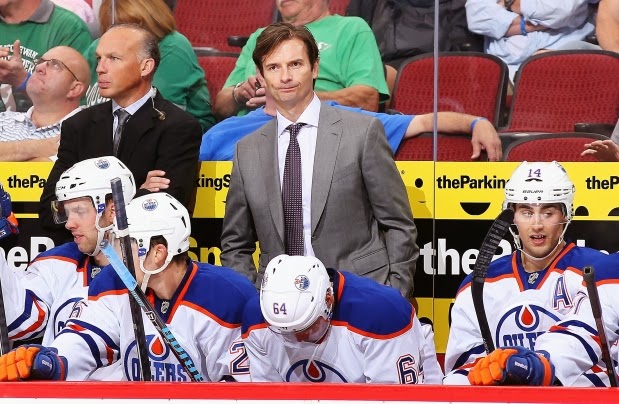 Be it his obsessive fascination with individual fitness level or the need to continually focus on his players “compete” level, even though he had yet to coach the vast majority, Eakins came across as a bit of a hard-ass. He talked about employing a “swarm” styled defensive system, despite having many players that were and still are dysfunctional in their own end of the rink.

Wanting to come in and make a good first impression is all well and good but recognizing your audience, is sort of important, no? Trying to change many of these players into something they are not, in my mind, was the biggest mistake the forty-six year old has made. Don’t get me wrong, the players need to be held accountable for their individual play within the system but using them in roles they are best suited for is essential.

While the Oilers young forwards still have a ton to learn, at some point, you have to loosen the reins on these guys. Did the Oilers draft these players to be elite offensive players or did they bring them in hoping they would transform them into two-way forwards? When the organization decided to draft Nail Yakupov, I’m guessing they were hoping he would eventually turn into one of the game’s premier snipers but maybe I was wrong.

The young Russian has limitations in his game but instead of recognizing his shortcomings and placing him in a situation to succeed, while still teaching him the “right way” to play the game, the rookie coach has taken to breaking the kid down and trying to rebuild him into something he is not.

With all due respect to Eakins, Ralph Krueger had to go through the exact same process with Yakupov last season and yet he found a way to find a healthy balance. It is rather funny how many tend to forget the former Sarina Sting standout wasn’t handed anything by last year’s staff. He saw his fair share of time in the Oilers bottom six but was also given opportunity, as the season moved along, to do what he does best…create offence.

Same goes for using Taylor Hall at centre to start training camp, even though the player had zero interest in playing the position. Some will say the coach’s hands were tied because of injury but I have never and still don’t buy that argument. Despite what they told the media, this organization was always expecting Ryan Nugent-Hopkins too be ready to go within the first week or two of the season getting underway, making the injury argument a moot point.

When Sam Gagner broke his jaw, the situation changed but the plan all along should have been for Mark Arcobello to be option #1 and not Hall. I said it at the time and I stand by it. The only thing playing Hall at centre accomplished was having him get off to a dreadful start and pissing him off. What I have yet to get my head around, is this fascination of using him at centre to begin with.

After watching #4 put together the sort of campaign he did in 2013, why would anyone want to mess with it? Again, instead of trying to help the player along, this staff decided to try and change him into something he is not. Taylor Hall is a different type of player. The kid is a thoroughbred and needs to be used as such.

Despite rediscovering his scoring touch after his slow start, Hall has been nowhere near the dominating threat he was last season. In fact, it could be argued all of the Oilers young forwards have taken a step backward when it comes to creating scoring chances upfront. I know I am not the only one who sees it and the most troubling part of it all, they should be trending in the other direction.

This team was never going to go out and win games 2-1 and hold the opposition to 20 shots a night. That isn’t how it’s constructed and certainly wasn’t how it was drafted. Instead of insulating some of these kids with the likes of a Shawn Horcoff type player on their line, which seemed to work just fine in the past, they have decided to take these players out of the comfort zone and it isn’t working. While the organization will tell you the kids are seeing “tougher” matchups for the first times in their career, that isn’t necessarily the case for all of them.

The trio of Jordan Eberle, Hall and Nugent-Hopkins had that same assignment for much of the 2013 season and held their own when it came to creating scoring chances. The problem they had was putting the puck in the net. That said the fact both Eberle and Nugent-Hopkins played much of the season battling injuries didn’t help. As a line they are capable of holding their own against elite competition but that isn’t going to happen if you have them playing a defence first brand of hockey and without some form of support further down the lineup.

In my opinion, this is where the coach and general manager have failed miserably.

Let’s be honest here, did anyone think using a second line of David Perron, Sam Gagner and Yakupov would work? Why Eakins didn’t turn to a line of Boyd Gordon, Ales Hemsky and Perron much earlier in the season is beyond me. Looking at this roster out of camp, it was only other combination that made sense as a possible secondary tough minutes line and yet we never saw it until recently.

Hand the so-called softer minute to the likes of Arcobello, Gagner and Yakupov at even strength and see if they can produce some offence. Is it an ideal setup? No but until more roster moves were made, it would have at least give them a punchers chance and hopefully keep the head coach from trying to turn everyone into the second coming of Jonathan Toews or Pavel Datsyuk.

If Dallas Eakins expects to enjoy any sort of success during his time as the head coach of the Edmonton Oilers, two things need to happen. Craig MacTavish has to go out and find him some better players and Eakins has to accept his players for what they are and work with them to become better…not change them into something they are not.

If those two things happen, this mess will finally start to turnaround and head in the right direction.
Posted by Oil Drop at 11:11:00 am