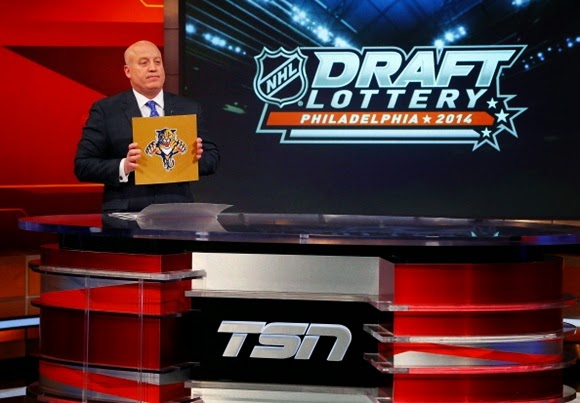 When NHL Deputy Commissioner Bill Daly opened up the final envelope of the 2014 Draft Lottery and pulled out the card of the Florida Panthers, all I could do was shake my head. Through eighty-one games, the Edmonton Oilers sat 29th in the overall standings, one point ahead of the Panthers.

Last Saturday was a very special night for Ryan Smyth, the fans and the entire organization. While it was a moment that will undoubtedly go down as one of the most touching in franchise history, the two points they earned against the Vancouver Canucks will now be forever linked to what might have been.

While fans across Oil Country cried foul at the notion of changing anything about the season finale and #94’s farewell, let’s look at this logically for a moment. The fact Edmonton beat the Canucks 5-2 had absolutely no bearing on how things unfolded at Rexall Place. The outpouring of emotions from both Smyth and the Oilers faithful had absolutely nothing to do with those two points. To be honest, the moment that final buzzer sounded all that mattered was what followed.

To be fair, if the Oilers had been smarter, they would have secured that pick over the final few weeks of their schedule but instead they decided to dress a full lineup each and every time out. Would it have killed them to rest one of their many banged up top forwards for a game here and there down the stretch? When Viktor Fasth was out with a concussion, could they not have given Laurent Brossoit a look-see?

The moment Roberto Luongo was knocked out of action with a sore neck in late March was the very moment Edmonton should have become proactive. If they had done that, Game 82 would not have mattered and Smytty’s swan song would have never have been part of the equation. If you are going to suffer through a season like the Oilers have, you better make damn sure you put yourself in a position to get something special out of it. It’s really that simple.

Just as their season-ending win against the Calgary Flames on April 7th, 2007 cost them the opportunity of selecting Patrick Kane, as the Chicago Blackhawks won the lottery in the spot the Oilers held heading into the season finale, another meaningless win has come back to bite this organization in the ass. Instead of stepping up the podium and calling the name of Barrie Colts defenceman Aaron Ekblad on June 27th in Philadelphia, they will now have to sit and wait.

There is absolutely no doubt Florida will take Ekblad at one, with the Buffalo Sabres selecting either Sam Bennett or Sam Reinhart at number two. Meaning the Oilers will have the choice of grabbing one of the Sam’s or Prince Albert’s Leon Draisaitl. All three appear to be good prospects but by the sounds of it, look for Edmonton to take the big German centre.

What makes things even worse is the fact the Flames are slated to pick fifth and may very well end up with the better player because of the Oilers desperate need for size up front. While a kid like Draisaitl will likely play in the NHL next season, the last thing Dallas Eakins needs is another inexperienced youngster in his top six, which is exactly what he would be asked to do in the Alberta capital in 2014-15.

Maybe Craig MacTavish will luck out and have one of his fellow general managers come calling for the third overall pick, in hopes of acquiring one of Sam Bennett or Sam Reinhart on draft day. Should that occur, perhaps pulling the trigger on a draft floor deal might be the way for MacT to go. If no such deal comes to fruition, this entire situation has disaster written all over it.
Posted by Oil Drop at 11:40:00 am