A Night To Remember 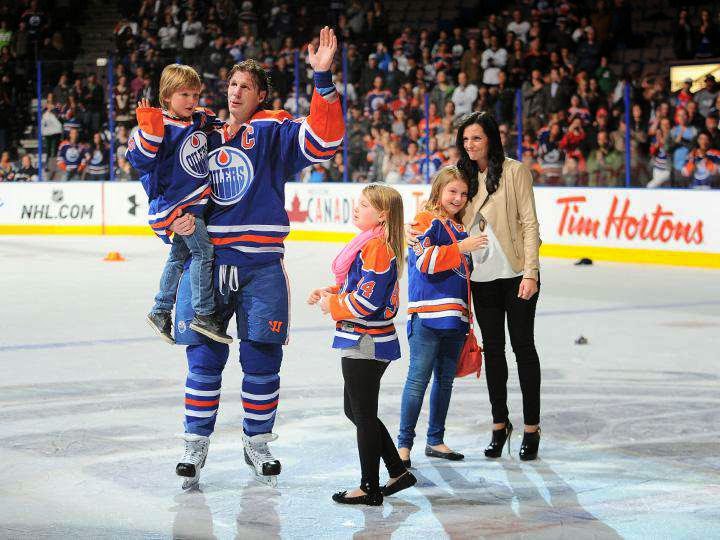 On a night in which the Edmonton Oilers managed to not only back their way into 28th place in the NHL’s overall standings but also see Taylor Hall become the first Oilers player to register an 80 point campaign since former captain Doug Weight posted ninety back in 2000-01, all that really mattered was the guy wearing #94 in Orange and Blue.

In the grand scheme of things, last night’s 5-2 win over the visiting Vancouver Canuck was nothing more than another meaningless season-ending victory for this once storied franchise but it was one hell of a special night for Ryan Smyth and his legions of fans across Oil Country.

While the 2013-14 season may go down as the most disappointing in team history, its final chapter will undoubtedly be remembered as one of its most touching moments.

The night was supposed to be about celebrating what has simply been an outstanding career for the former 1994 sixth overall pick but in the end, at least in my mind, it was less of a celebration and more a realization of just a how strong the love affair between the player and these fans truly is.

For a franchise that has not only managed to win five of the seven Stanley Cup Finals they have participated in but also produced six Hall of Fame players in Grant Fuhr, Paul Coffey, Glenn Anderson, Jari Kurri, Mark Messier and Wayne Gretzky, it is arguably Smyth who is the most popular player in this club’s history. Think about that for a moment and let it sink in.

Now is that because he is the one guy today’s generation of Oiler fans are most familiar with and can relate to? Certainly but the sheer volume of old-timer’s who hold the now 38-year-old in such high regard, is simply staggering. Those fans lived through the “Dynasty Years” and were lucky enough to have watched the finest collection of offensive talent on any roster in the history of the game.

Yet many put Smyth on an even higher pedestal, albeit a different one. For most fans, when it comes to Smytty, it wasn’t about how many points he scored or even about winning and losing. What mattered most was what he represented. Edmonton is a blue-collar city and Edmontonians have always held athletes who play with a ton of passion and bust their ass while doing so, in high very high regard.

That is the exact player the native of Banff, Alberta was and these fans love him for it. While last night was something he and his family will never forget it was a night Oiler fans will cherish forever. Smyth may not have scored that elusive power play goal he wanted but in the end, it was almost fitting that he didn’t. The fact he sits where he does among this franchise’s all-time leaders says a lot about the sort of career he had and his longevity.

For my money, he is not an all-time great and should not have his number hung in the rafters with Gretzky and company. In my opinion, only the best of the best should have their number’s retired and Smyth does not belong in that category. However, that doesn’t mean he should not be honoured down the road in some manner or another. The man has earned all the accolades that have come his way over the last couple of days and arguably the coolest part of yesterday’s “celebration” was watching the entire Vancouver team come back out onto the ice and shake his hand.

That is the sort of treatment you see players like Gretzky or Mario Lemieux receive…not Ryan Smyth. For the Canucks players to have gone out of their way and make that sort of gesture, says a lot about what players across the National Hockey League think of him. Ryan may not be an all-time great, but he was one hell of an ambassador for both the city of Edmonton and this franchise. To be perfectly honest…this organization was lucky to have him.
Posted by Oil Drop at 8:26:00 pm