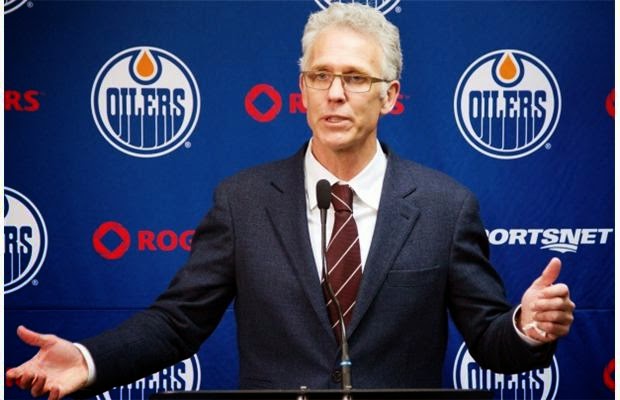 No one should have been surprised with the approach Craig MacTavish decided to take to his year-end press conference. After promising big changes and letting the entire hockey world know he wasn’t an overly patient man during his introduction as the Edmonton Oilers general manager, the 55-year old tried putting a positive spin on what was a disastrous 2013-14 campaign.

He openly admitted to having to make more changes during the coming off-season but instead of throwing his coaching staff and players under the bus, MacT decided to focus on the positives and who could really blame him. Were there good things that came out of this season? Of course, but this team finished dead last in the Western Conference and that has to outweigh everything else.

The first-year general manager had nothing but positive things to say about the job head coach Dallas Eakins did during his first year behind the bench and was equally positive about the rest of the coaching staff. That said, he made it very clear Eakins would have the final say as to whether or not the trio of Keith Acton, Kelly Buchberger, and Steve Smith would be returning for another kick at the can in 2014-15.

“I really feel Steve Smith is developing into an exceptional coach. He’s got a great rapport and Kelly Buchberger has a lot of great traits that he adds to this hockey club, but ultimately it’s the head coach’s decision. I feel they’re the right piece, but he’s got to feel that they’re right. I really feel that this staff really started to function well at the end of the year. I mean, it was chaos early on…absolute chaos. There was disappointment. There was negativity in the coach’s room, but things stabilized by the end of the year. The easiest piece to get rid of would be the assistant coaches, but they function well in a group.”

MacTavish made it abundantly clear he would do everything in his power to go out and try to improve the scoring depth up front and possibly acquire a high-end defenceman but wouldn’t bother looking at so-called “middle of the road” guys for his blueline. He again confirmed the quartet of Jordan Eberle, Taylor Hall, Ryan Nugent-Hopkins and Justin Schultz as being the core of this “rebuild” and is not seriously considering moving any one of them moving forward.

That’s all well and good but unless they can move their 2014 first round pick for a top end defender, the only way one will be coming to town is via a core piece going the other way. If such a move isn’t in the cards, MacT said he would have no problem going into next season with what is frankly a ridiculously young D core.

If the plan is to try and run the table with a top five of Andrew Ference, Oscar Klefbom, Martin Marincin, Jeff Petry and Schultz, this team will once again be in deep trouble. While the Oilers goaltending played a major role in them being knocked out of the playoff picture early on, if they are hoping the tandem of Viktor Fasth and Ben Scrivens will be good enough to get them over the hump with what is arguably the same backend, they are kidding themselves.

Again, no one should have expected MacTavish to come out and say he was going to blow this thing up but hearing him say the following was a little much.

“I’m very optimistic, very bullish about the future of this team. There’s been a lot of pain and suffering, but at the end of the day the failure gives us great opportunity to continue to get better. We’ll get another piece this year. We’re way further ahead in my mind. I know that is debatable. You can analyze that and draw your own conclusions. But in my mind we’re way further ahead right now than we were at this point last year.”

While he can be as optimistic as he’d like, how is this team any better? Special teams were worse. Goaltending is still a question mark. The defence still isn't good enough and the forward depth is still lacking. Correct me if I am wrong but are the Oilers not taking part in yet another Draft Lottery this evening? They may not be any worse, but they are certainly not any better.

One thing is clear, this team needs to get quite a bit better over the next five or six months and it will be up to Craig MacTavish to improve this roster. At the end of the day, what he says on April 15th matters little come next October. However, what he actually accomplishes over the coming months will and that is what anyone should really care about.
Posted by Oil Drop at 9:47:00 am