Is There Room For Sam Gagner & Ales Hemsky? 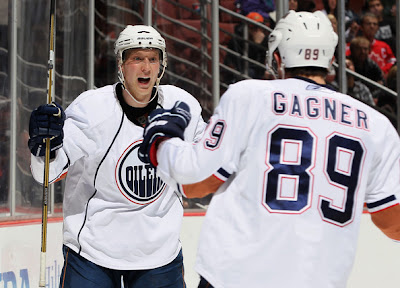 Everyone seems to be in agreement, that the coming year is huge for the future of Sam Gagner as an Edmonton Oiler. When it comes to Ales Hemsky, we all realize that there is no guarantee the talented Czech will be an Oiler by seasons end, which was detailed here in an earlier post.

With the start of the season on the horizon, I am once more mulling over the future of these two in my mind and I am starting to believe that the Oilers may have room for neither player, never mind both. Unless they decide to change their approach, when it comes to using their 22 year old centre.
One would have to think that over the next two seasons, the following players will be in the mix and likely all in top nine forward spots:
You give another spot to one of  Shawn Horcoff or Eric Belanger, as at least one, if not both, of them will be in the mix.Which brings us to the question of where on earth would Gagner and/or Hemsky fit into the equation? Hemsky really does seem like he will be the odd man out and moved to another organization, at some point, during the upcoming campaign. With Eberle, Hall and Paajarvi taking three of the top four spots on the wing and with all three needing a hefty increase in pay come 2014, financially and development wise, it makes no sense to sign Hemsky long term.

That fourth spot could possibly be for Linus Omark or maybe Teemu Hartikainen, in a couple of years time. That being said, the Oilers do have a couple of other options at their disposal to fill that last spot on the wing. One would be bringing in a bigger bodied forward into the organization, via trade or free agency, to help with the mix upfront. The other, would be taking a hard long look at moving Sam Gagner to the wing on a permanent basis.

With Ryan Nugent-Hopkins and Anton Lander likely taking two of the clubs top three centre spots and the potential of a Tyler Pitlick being part of things in the not to distant future, keeping Gagner to play as a centre does not seem realistic. In my mind, his lack of size and continued struggles in the face-off circle make him an automatic no as a centre but my answer changes to a resounding yes to keeping Gagner and his skill level on the team.

Putting him into a top four role on the wing, with last seasons trio of rookies, might just be what the doctor ordered for the London, Ontario native. That would leave the Oilers with, potentially, Omark and Hartikainen as the third line wingers and power play specialists...which does not sound too bad at all.

Having Sam on the wing should allow him to simplify his game and concentrate on what he excels at...being creative with the puck. I do feel that he has tried so hard to make himself a solid two way centre that it has effected the creative part of his game. By releasing him of the defensive responsibilities that any quality NHL centre must be able to handle, we may just see a rejuvenated Gagner.

Lets face it, the kid has talent to spare and he is a gamer but what is being asked of him may simply be too much for him to handle. If a player is sacrificing a major part of his game to fill a certain role for his club, than that organization needs to take a long look in the mirror and ask themselves, if they are giving that player the best chance to succeed. If the answer to that question is no, than it might be time to re-examine that decision.

I fully expect both Sam Gagner and Ales Hemsky to play major roles for the Edmonton Oilers in the coming season. I just can't see either one being here, in those same roles, come 2012-2013.
Posted by Oil Drop at 8:51:00 am