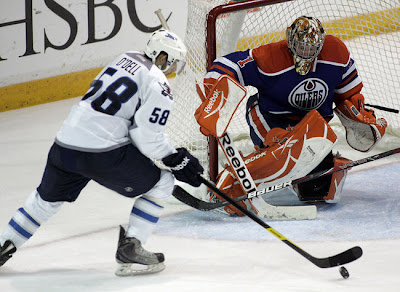 The Edmonton Oilers rookie prospects continued their winning ways, with a 2-0 victory over the Winnipeg Jets on Tuesday evening. Almost seemed fitting that the newly formed Jets franchise, lost their first game to the Oilers...which was the case, more often then not, for the first incarnation of the Winnipeg Jets when they played Edmonton.

While goaltender Olivier Roy looked good in between the pipes on Sunday night against Vancouver, Tyler Bunz was at another level in his first appearance in the Oilers goal. The Jets fired 23 shots at the 19 year old netminder but were unable to sneak one by the Regina native. Bunz made at least five highlight reel stops on the evening, the best of the bunch being a great in tight save on Levko Koper...on one of the many odd man rushes Winnipeg had on the evening.

While Edmonton sat out game one standout Anton Lander, they did not miss a beat early on...scoring twice before the game was nine minutes old. Chase Scaber opened the scoring, on a scramble in front of the Jets goal to put the Oilers up one. Ryan Lowery put them up a pair, scoring on a point shot on the power play. Ryan Nugent-Hopkins had a secondary assist on the Lowery power play marker and made a couple of nice passes that were not converted by his linemates. That being said, the first overall pick did not have his "A" game going last night.

Defenceman Taylor Fedun impressed on the night and was one of the better skaters for the Oilers. He was solid in his own end and has shown the ability to move the puck up the ice in the first two games. Tyler Pitlick made his debut at the Young Stars Tournament last night and while he didn't get on the score sheet, I noticed him everytime he hit the ice. He delivered a few big hits and seemed engaged all night long.