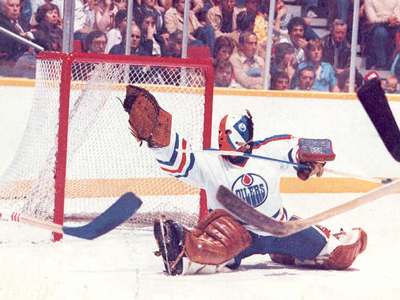 When people look back at the 1981-82 Edmonton Oilers, it usually surrounds one of two things. Wayne Gretzky and his staggering  92 goal, 212 point campaign, which included his historical march to 50 goals in 39 games, or the team's poor performance in the playoffs against the Los Angeles Kings...most notably the famous collapse in Game Three, that will forever be known as the "Miracle on Manchester".

While no one would ever debate the magnitude of those two moments and their place in the history of the game, there was another franchise changing moment that occurred during that historic season. In a year that was filled with many highs and one very low moment for the young Oilers, a key ingredient to their future success arrived in town, a young netminder by the name of Grant Fuhr.

In a somewhat surprising move, the Oilers selected Fuhr with the eighth overall pick in the 1981 Entry Draft and just ahead of the New York Rangers, who thought very highly of the Victoria Cougars goaltender. Edmonton was coming off a stunning upset of the Montreal Canadiens in the first round of the playoffs and were backstopped by young rookie netminder Andy Moog.

With the twenty-one-year-old Moog stealing the show against the Habs, most felt the club had their goalie of the future. Fortunately, head scout Barry Fraser thought otherwise. In the scouting staff's mind, selecting Fuhr was a slam dunk. You will often hear this sort of thing from an organization after the fact but the Oilers did actually have him rated at number one and were thrilled he was still available at the number eight spot.

Grant was coming off a season in which he went 48-9-1 with a 2.78 GAA and won the Del Wilson Trophy as the top netminder in the WHL. Victoria was not only the best team during the regular season but also went on to win the Western Hockey League championship and was their representative at the 1981 Memorial Cup.

Heading into his first NHL training camp, Fuhr would have to battle both Moog and NHL veteran Ron Low, to earn a spot with the big club. Edmonton decided to start the season with all three on their roster but that scenario would not last long. After handing Moog starts in four of their six games, with Fuhr and Low splitting the other two, the organization decided to send last year's playoff hero back to Wichita and run with the kid and the grizzled vet as a tandem.

After losing his NHL debut by a score of 4-2, to the Winnipeg Jets on October 14th, Fuhr would not lose another game until January 16th. The Spruce Grove native went twenty-three straight games without a loss and ended up compiling a stunning 28-5-14 record on the season and an impressive 3.31 GAA, putting him in the top five in the league.

In fact, the New York Islanders Billy Smith was the only goalie who appeared in at least forty games who had a better goals-against average than the Oiler rookie. Pretty impressive for a nineteen-year-old kid and considering he played much of the season with a chronic shoulder dislocation, made it even more remarkable.

Also, one must remember, at that time, Edmonton was about as far away from a defensive juggernaut as you would find in the entire NHL. They were a highly talented group but at that stage in their development, it was firewagon hockey all the time. While no goaltender in their right mind would complain about backstopping a club that would go on to score 417 times, as the Oilers did that season, their netminders were left to fend for himself.

Fuhr was named the starting goaltender for the Campbell Conference at NHL All-Star Game and was selected to the Second Team at seasons end. He finished second in voting for the Vezina Trophy to Smith, as the league's top goaltender, and was also the runner-up to Winnipeg's Dale Hawerchuk for the Calder Trophy, as top rookie. Obviously, voters favoured the impressive 103 point season the Jets centre put together over the Oilers' new No. 1 netminder but in my mind, it was a debatable decision.

Right from the start, Fuhr seemed to have the perfect temperament to be a starting goalie and played a flashy style to boot, which fit in perfectly with the high-flying Oilers image. Be it as a rookie or later on in his Oilers tenure, when he was widely regarded as the best goaltender on the planet, all that mattered was winning hockey games. In his mind, winning by a score of 10-9 or 2-1 mattered little. Either result would get you the same thing...two points. At the end of the day, that is all that mattered.

Fuhr allowed his teammates to not only play but also develop, their wide-open style of play...without fear of what might happen in their own end of the ice. He came up huge time and time again and showed the ability to make the big save when his team needed it most, which was a trait he had throughout his Hall of Fame career. Be it making saves in the first to keep the team in games or late in the third to preserve a victory, Grant always found a way shut the door.

Also, think back to the era and can you think of a single goalie that played the position like Fuhr? He played the game with a style and quickness that no netminder before had shown. He was a hybrid butterfly/stand-up goalie from the start but it was his reflexes that set him apart from any other goalie.

Even at the tender age of nineteen, Fuhr had the best glove hand in the league by a country mile and his ability to quickly recover and be ready to face second and third shot opportunities was unmatched. He would make acrobatic saves look routine that other goalies of that era could only dream of making. From the first moment he hit NHL ice, it was clear that Fuhr was a shot stopper...not a shot blocker.

As an organization, the Oilers not only wanted to win the Stanley Cup within the first five years of their existence but they wanted to do it playing a free-flowing attractive brand of hockey. Yes, they would have to learn to shore up their own end before bringing Edmonton that championship but none of that would have been possible without the right guy in between the pipes.

The year he put together during that 1981-82 season was and still remains one of the greatest rookie performances in the last thirty-five years. The Edmonton Oilers already had the best player in the game in No. 99 and by deciding to select Grant Fuhr with that eighth pick of the 1981 Entry Draft, they would soon be blessed with also having the best netminder in the world.