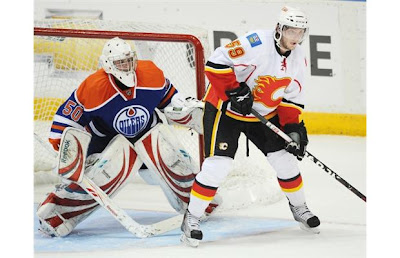 With Ryan Nugent-Hopkins on the sideline for the Edmonton Oilers final game at the Young Stars Tournament in Penticton, the club was unable to make a clean sweep of their three game schedule. The Calgary Flames youngsters were able to outlast the Oilers rookies to earn a 4-3 victory.

The Flames scored two goals in the opening period, including a power play marker from thirteenth overall selection Sven Baertschi, before the game was eight minutes old. Edmonton looked disconnected throughout the opening stanza but they righted the ship after the first and came hard over the final forty minutes. Another goal from young Anton Lander and the first of the tourney for Tyler Pitlick gave the Oilers hope to get the equalizer but it wasn't in the cards.

Unlike the first two games, the Oilers had the second best goalie on the ice tonight and it definetly had a bearing on the outcome. While Flames goalie Jonu Ortio was far from sensational, he was better then Oiler netminder Adam Brown. Both goaltenders let in a softie but it was Ortio who was able to make a save or two when his teammates really needed it.

Baertschi scored his second power player marker of the night early in third to restore the two goal lead for the Flames. Lander cut the lead back to one, four minutes later, on a beautiful feed from Tobias Rieder that the Swede made no mistake with. After exchanging goals only a minute later, the Oilers pressed for that fourth goal but were unable to make it happen. The best chance fell on Lander's blade in the final minute but the tournament stand out fanned on a wide open look in the slot. Missed chance aside, Lander continued his strong play in both ends of the rink and was one of the Oilers best players on the night.