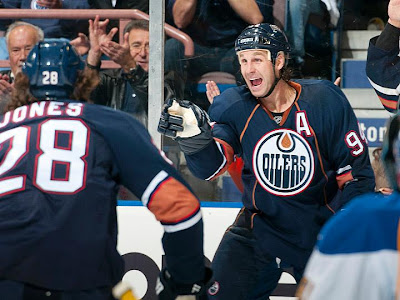 
Edmonton finished the month off with a 7-2-2 record but they are now headed out on a tough six game road trip, starting Thursday evening in Los Angeles. The Oilers have had a favourable schedule to start the season, with eight of their first eleven games on home ice, but they have played a number of good clubs during that span. The key to having a successful season is always determined by a clubs ability to beat teams on home ice and for the first time in ages, Edmonton is making Rexall Place a very uncomfortable place for the opposing teams to visit.

The home side opened the scoring just past the five minute mark of the first period, when Shawn Horcoff took a beautiful feed from Nugent-Hopkins and potted his second of the campaign, on the power play, past Blues netminder Jaroslav Halak. The Blues tied things up early in the second period, on a bullet-like wrist shot from David Backes, but Edmonton quickly turned the tide and took over, scoring three more before the middle stanza was over.
Smyth scored his first of the night banging in a rebound from in tight after Halak made the initial save off a point shot from defenceman Alex Plante. Plante was making his season debut in place of Cam Barker, who was a late scratch with a sore shoulder. The Oilers then stretched their lead to two, when Jordan Eberle finished a beautiful three way passing play for his third of the season. Before the period was out, Smyth potted his second of the night, once again on a rebound from in tight, to give the Oilers a 4-1 lead heading into the third. While the Blues managed to slip one more puck past the red hot Nikolai Khabibulin in the final twenty minutes, Edmonton held on to improve their home record to a very  impressive 6-1-1.
The Good