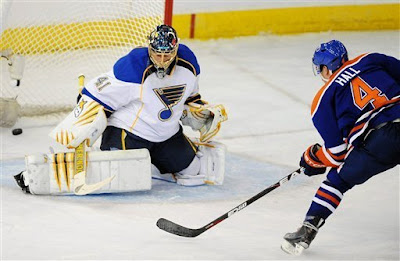 
With the club winning four straight I can't see them making any changes upfront. Linus Omark did take the pre-game warm up in Colorado but did not play. If the young Swede does not play tonight, it will be five games in  a row that he has sat out and you would have to think that Edmonton would make some sort of decision on him shortly. I have no doubt that he'll make the teams upcoming six game road trip but if he continues being a health scratch, I would expect the club to send him down to Oklahoma City.


With Andy Sutton out of the lineup pending his hearing with the NHL, for his hit on the Avs rookie forward Gabriel Landeskog, defenceman Jeff Petry will find himself back in the Oilers top six. While Sutton was paired with Corey Potter, I wouldn't be surprised to see Cam Barker move into that spot leaving Theo Peckham and Petry as the third pairing. This way the top two pairings will see the majority of the minutes. The third pairing will see significantly fewer minutes 5-on-5 but Peckham will see some PK time and Petry will, no doubt, get time on the power play.

Netminder
Nikolai Khabibulin will get the call for the Oilers and will have to follow up Devan Dubnyk's 40 save performance with another good effort. Both goalies will see time on the upcoming road trip and look for the Russian netminder to continue his fine play against the Blues.