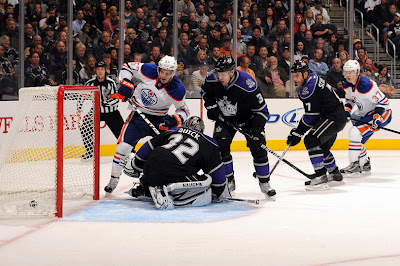 The Edmonton Oilers having been winning their fair share of hockey games this season but they have been doing it with next to no offensive support from their third and fourth lines. Well, that all changed last night. Edmonton got a goal from each of those lines and another from the red hot Ryan Smyth, in defeating the Los Angeles Kings by a score of 3-0. The win was the Oilers sixth in a row and moves their record to 8-2-2, which leaves them tied for first in the Western Conference, with the Chicago Blackhawks.
Nikolai Khabibulin picked up his second shutout of the season and dropped his league leading goals against average to a ridiculous 0.98 on the season. For one of the few times this season, Edmonton out shot their opponent, 27-19, yet they still managed to block 22 shots on the night with Ladislav Smid leading the way with five. Smid has turned into a shot blocking machine this season and now sits with a staggering 45 blocks thru twelve games. The Oilers were the better team in all areas on the night and were full marks for the two points.
After a scoreless first period, Smyth opened the scoring with a lucky goal just past the midway point of the second. His pass out from the side of the Kings net, deflected off the stick of defenceman Alec Martinez and then banked off netminder Jonathan Quick and fell past the goal line to give Edmonton a 1-0 lead. The goal was the sixth of the season and fourth in three games for the former Los Angeles Kings forward.
Six minutes later, Edmonton stretched the lead to two when rookie Lennart Petrell scored the first goal of his career. Ben Eager bounced off of a check from Justin Williams down low and managed to swing the puck to the front of the Kings net and the hard working Finn slipped the rebound past Quick for his first of the season. Centre Anton Lander, picked up an assist on the Petrell marker, which was the first point of his NHL career.
The Oilers made it 3-0 at the 1:06 mark of the third period, when Corey Potter popped his second of the season past the Kings netminder. The blueliner pounced on a loose puck, after Sam Gagner's pass from behind the net bounced off Willie Mitchell's skate and conveniently landed in front of the pinching defenceman. The victory marked the first time Edmonton has won six straight games since back in March of 2002 and improved their road record to 2-1-1 on the season.
The Good