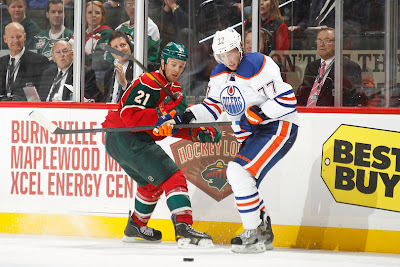 Devan Dubnyk -  The young netminder has been very good this season but unfortunately for Dubnyk, his goaltending partner has been even better. He has been positionally sound all season long and has shown marked improvement in his rebound control. Now in his third year, Dubnyk has the confidence in his own game to remain calm in between the pipes and it reflectes in how well the team plays in front of him. They are confident that he will give them a chance to win every time out and you can't ask for much else from your goalie. Needs To Work On: Not going down too quickly. He has become so confident in his positioning that he sometimes goes down too early and is victimized on shots over his shoulder.
Grade: A

Nikolai Khabibulin - The veteran goaltender's performance has easily been the biggest surprise in the league this season. I've mentioned in the past that I expected a strong bounce back from Khabibulin but nothing to this degree. The Russian netminder has tracked the puck exceptionally well this season and his rebound control has been magnificent. The biggest area of improvement in his game, has been not allowing that next goal. The mark of a great goalie is when he makes the big save and when he allows goals against. At the moment, there is no one better then the Oilers goaltender. Needs To Work On: There are no holes in his game currently but he does need to make sure he gets his time to rest and recoup. The player and team must both ensure the sixteen year vet is kept fresh all season long.
Grade: A+

Cam Barker - The hope was far Barker to come to Edmonton and find the game he showed as a member of the Chicago Blackhawks. So far, that hasn't been the case. While he hasn't been terrible, he hasn't done anything that has made him stand out. In his defence, the former third overall selection has had no time with Ryan Whitney, which I felt would be his ticket to relocating his game. The biggest surprise, is his ineffectiveness on the power play as he has now become the third or fourth option on the PP. His goal against Colorado was his first point of the season...simply not good enough. Needs To Work On: Using his shot more often. Be it 5-on-5 or on the power play, Barker has to find a way to use his canon of a shot as a weapon.
Grade: C

Tom Gilbert - While Gilbert has been asked to be a minute eater in past seasons due to injuries, he has always seemed to be in way over his head. That has not been the case this season. The defender has averaged just under 25 minutes of ice time a night and his play has been nothing short of brilliant. The talented defenceman has simplified his game to the point that he rarely makes a mistake out there. While he still moves the puck up ice better then any other Oiler blueliner, it is his defensive zone coverage that has taken a huge step forward. Needs To Work On: Shooting the puck. He seems to have made more of an effort to shot this year and has apparently changed the way he is gripping his stick. That being said, he still doesn't shoot enough. He's on pace for about 110 shots this season, which is what he has averaged every season.
Grade: A+

Theo Peckham - He struggled throughout training camp and that has carried over into the season. Peckham was more often then not, a top four d man last season but this season he has found himself being a healthy scratch. The biggest issue with the rugged blueliners game, is his poor decision making. Be it throwing brutal passes up the middle of the ice or taking a dumb penalty at the worst possible moment, Theo has become a bit of a liability on the ice. Needs To Work On: Keeping his game simple and not trying to be the hero. He needs to recognize his limitations as a player and play within them or he will find himself in the press box on a regular basis.
Grade: D


Jeff Petry - The young defenceman only played three games before being sent down earlier in the season but was just called up and played a great game against St.Louis on Sunday. Petry has a high end upside to his game but we still have to see it on a game in game out basis. Needs To Work On: Becoming more of a force on the power play, which will be his bread and butter. At times he looks like a world beater on the power play while other times he's more of an observer and seems unwilling to become more involved in the play.
Grade: N/A


Corey Potter - No one has been a more pleasant surprise then the veteran AHL defenceman. The club made it clear heading into training camp, that they felt Potter had a legit shot of making the team. That being said, no one expected this. The blueliner has been logging 21 plus minutes a night and currently leads Edmonton defencemen in scoring. He has a goal and six assists in nine games and has forced his way onto the power play, where he has become a regular fixture. The former Rangers draft pick does nothing in spectacular fashion but he simply gets the job done. Needs To Work On: Positionally he has been good but occasionally gets himself turned around in the Oilers zone. There really is nothing to be critical of to this point in the season.
Grade: A+

Ladislav Smid - Once the season was set to start, there was concern surrounding Smid and his shoulder. Mine was more due to the fact that he seemed to always find a way to get injured. No one would ever doubt the his heart but his game had yet to take a step. That finally changed this season. Now in his sixth full year, it appears that Laddy has found a way to slow the game down and make things work. The ritual of watching him give up the puck regularly or losing his mark in front of the Oilers net, is no longer present. Smid has become a solid stay at home defenceman and now does much more then just be a physical presence.Through the first eleven games, the Oiler #5 leads the NHL with 40 block shots, which puts him on an absurd pace that would see him block 300 shots in a full season. Needs To Improve On: To not block shots from every where on the ice.While noble, at times it is unnecessary and will lead to injury at some point.
Grade: A

Andy Sutton - The big defenceman was brought in to help protect the young kids while hopefully not hurting the team in his own end. Sutton hasn't been been fantastic but he has been solid and has given the Oilers a decent option  for their bottom pairing. His foot speed has always been an issue but he has yet to look like he has been caught in quicksand and unable to do anything about it. Need To Improve On: When Sutton drops the gloves he needs to be a willing combatant and not look to just hold on. Watching him hold on to little Brandon Prust, in fear of getting popped just didn't sit well with me.
Grade: B-

Ryan Whitney - Is by far and away the best defenceman on this team but the fact that he can not seem to stay healthy is concerning. Whitney is still in the prime of his career and the Oilers blueline should be built around him but that may not be possible. With the club playing as well as they have, one could only imagine how good things could be with a fit Whitney in the lineup. Needs To Improve On: Staying away from voodoo dolls, black cats walking under ladders and keep from breaking mirrors.
Grade: N/A


October Report Card Forwards and Coaches
Posted by Oil Drop at 6:02:00 am