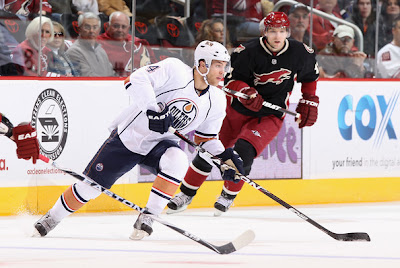 Can't see any changes upfront. Coming off a game in which the team finally got some production from their bottom six, look for the kids to  rebound with a strong game. It's a Hockey Night In Canada game, should mean another first star performance for Ryan Nugent-Hopkins.


This group was solid against the Kings on Thursday night and with Cam Barker banged up, don't expect any changes. Rookie Colten Teubert was very good in his debut and I absolutely love the physical side of his game. He doesn't go out of his way to find it but if the opportunity presents itself, he takes it. Anyone care to guess how many shots Smid will block tonight?


Netminder
Nothing firm on who is starting but you would think that Devan Dubnyk will get the call. His last start was just over a week ago against Colorado and with three games in four nights nest week, they will need both guys ready. Also, when you consider all the off ice issues that Nikolai Khabibulin had to deal with in Phoenix over the last couple of years, a night off for the veteran might be a good idea.