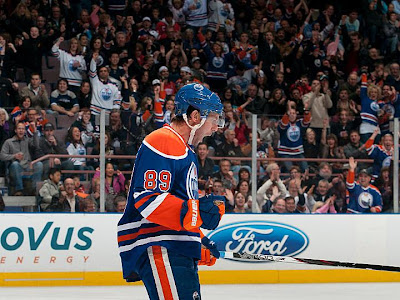 If only this could last forever!!! One would have to think, that was the thought process running through one Sam Gagner's head on Saturday night. After capturing the imagination of  the hockey world with his magical eight point performance on Thursday evening, Gagner managed to add another chapter to what has become a career changing couple of games.
After being in on all of Edmonton's eight goals against Chicago, Sam added two more goals and an assist in leading the Oilers to a 5-4 shootout victory against the league leading Detroit Red Wings. What made the three point effort so special, was the fact that they all came in the first period. That gave the former sixth overall selection eleven points in sixty minutes of hockey and gave him a hand in every goal the team scored in the last three periods. Those are not only mind boggling numbers but in this neck of the woods, those are Gretzky-like numbers.
It took Gagner exactly two minutes and forty-two seconds to notch his fifth goal in just over two periods of hockey and give Edmonton an early 1-0 lead. Ryan Whitney's point shot was blocked by defencman Niklas Kronwall but number eighty-nine was Johnny-on-the-spot for the rebound. Three minutes later, Sam would make it five goals and five assists, when he set up Jordan Eberle for his twenty-first of the campaign and the Oilers were up two.
Detroit caught a lucky break at the 19:23 mark, when Valtteri Filppula's shot was inadvertently knocked into the Oilers net by Whitney with netminder Devan Dubnyk out of position and helplessly looking on. However Edmonton would restore their two goal lead, before the period was out, thanks to one more goal from Sam Gagner. With time running out, Ryan Smyth fired a shot from the side boards that Gagner deflected past Conklin with under a second to play. That was point number eleven and a new club record. Gretzky had held the old mark of ten consecutive goals with a point, which he accomplished twice, but that spot in the record books now belongs to Sam on his own. While Darryl Sittler's ten point game back in 1976 against the Boston Bruins is till the measuring stick for points in a game, Gagner's eleven points in three periods is pretty damn impressive and arguably an even greater achievement.

After a scoreless second, Detroit turned up the heat on the suddenly surging Oilers and scored three consecutive goals to take a 4-3 lead, with under four minutes to play. While Edmonton could barely get out of their end for much of the final four minutes, they did manage to finally gain possession deep in the Detroit zone with under a minute to play. After a couple of frantic scrambles, Eberle knocked in his own rebound for his second of the night, to send this one into overtime.
Both sides had good chances in OT, with the best of the bunch being a wide open net opportunity for Smyth, that he somehow managed to put off the post. That meant this one would be decided in the skills competition portion of the night.
After Eberle and Pavel Datsyuk were both stopped, Gagner continued to carry the hot hand with a beautiful move to beat netminder Joey MacDonald, who had taken over for Conklin to start the second period. Devan Dubnyk then stopped  Jiri Hudler and MacDonald stoned Ales Hemsky, which left things up to Todd Bertuzzi. The big man scored two of Detroit's third period goals and made no mistake, ripping a bullet slap shot over Dubnyk to send this one to extra shooters.
Consecutive misses from Taylor Hall, Henrik Zetterberg, Eric Belanger and Filppula, set the stage for rookie Ryan Nugent-Hopkins. The youngster was playing his first game since injuring his shoulder back on January 2nd in Chicago. The Nuge came in and snapped a quick shot beating MacDonald on the blockerside to put Edmonton back in front. That meant former Oiler Dan Cleary, had to score to extend it to another round but Dubnyk made a nice pad save to end it.
Don't look now but Edmonton has gone 4-0-1 in their last five and just completed a three game sweep of what was a pretty tough home stand. They now head back out to the road for a three game trip that will see them make stops in Toronto on Monday, Detroit to face these same Red Wings on Wednesday evening and will complete the trek in Ottawa on Saturday afternoon against the Senators.
Posted by Oil Drop at 4:26:00 am