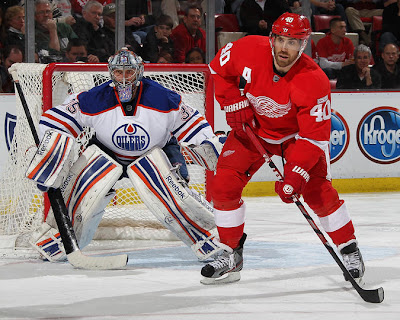 Despite another two goal performance from Sam Gagner, the Edmonton Oilers were thoroughly dominated on the road in falling 4-2 to the Detroit Red Wings. The Western Conference leaders have won eighteen straight at Joe Louis Arena are now two wins shy of equaling the NHL record of twenty consecutive home victories, that was set by the 1929-30 Boston Bruins and later matched by the 1975-76 Philadelphia Flyers.
In a first period that featured some sloppy play and a spirited tilt between Justin Abdelkader and Ryan Jones, it was the Wings who would strike first. Johan Franzen deflected home his twenty-first of the season and eleventh on the power play,  past starter Nikolai  Khabibulin to give Detroit the early lead. That was the difference in the first, as the Wings went one for one on the power play while the Oilers went zero for three and had a lengthy two man advantage. Shots on net were 5-4 for the home side, which says all that needs to be said about the visitors power play in the opening frame.
The second period saw Detroit take over the game. They seemed to have the puck throughout the middle frame and badly out shot Edmonton 15-5. They would double their lead courtesy of their fourth line, as they simply out worked the Eric Belanger line deep in the Oilers zone. After winning a puck battle against both Ryan Smyth and Belanger, Abdelkader drove hard to the net and was stopped by the Oiler netminder but hard charging Cory Emmerton would pick up the garbage and fire his sixth of the campaign past a down and out Khabibulin. It was starting to look like the old "men against boys" scnerio and Edmonton looked way out of their league. That was until a good shift from the Oilers fourth line, gave the visitors some hope.
Ben Eager nailed Dan Cleary with a clean hit that jarred open the Wings players bench door and sent the former Oiler flying into his teammates. Momentarily,  Detroit lost their cool and went looking for Eager and that allowed Jeff Petry to hit a streaking Sam Gagner with a lovely stretch pass, to send the NHL's hottest player on a breakaway. Gagner briefly lost control of the puck but quickly recovered and easily beat Joey MacDonald to give the Oilers life. It was 2-1 heading into the third, in a game Edmonton had no right even being in.
They would complete the come back, when Gagner would notch his second of the night on the power play. Magnus Paajaravi drove hard to the net and was stopped by MacDonald but Gagner picked up the loose puck to even things at two. The goal was his eighth in four games and gives the twenty-two year old centre fourteen points during that time span. There was just over a eleven minutes to play and the Oilers suddenly had a chance to pull this one out. Unfortunately, that feeling didn't last long.
Just over two minutes later, Detroit would regain the lead after Khabibulin was unable to squeeze a shot from Justin Abdelkader. The puck found it's way through the veteran netminder's pads and sat in the crease until Drew Miller poked it in for his eleventh of the season. A tough break for the Oilers but a break that was well earned by the Red Wings.
The two goal cushion was restored fur minutes later, when Henrik Zetterberg fired his tenth of the season past Khabibulin. The entire sequence leading up to the insurance marker occurred because of a couple of miscues by the Oilers and sneaky move from Zetterberg. Defenceman Cam Barker lost his stick in a battle with Zetterberg but did knock the talented Swede to his knees but while trying to get up, the veteran centre  managed to "slide" Barker's stick away from the blueliner, as he went to retrieve it. This freed up Zetterberg to head to the net and pick up a rebound, that the veteran puck stopper spilled into the slot, and he made no mistake putting this one to bed.
The Good