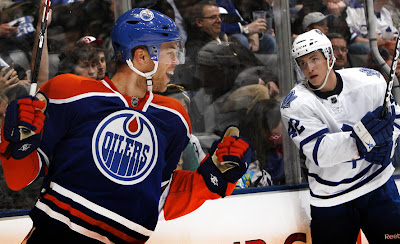 When the Edmonton Oilers came through Toronto during the 2010-2011 season, it was the Taylor Hall and Jordan Eberle show. The Oilers routed the Leafs 5-0 and left the hometown faithful booing their team off the Air Canada Centre ice. Fast forward just over a year and Edmonton is still struggling to find their way, while Toronto is in the middle of the playoff race in the Eastern Conference. That being said, the visitors are 4-0-1 in the their last five and head to the NHL mecca playing their best hockey since early November and seem ready to take on a Leafs side that will have their hands full dealing with the high flying Oilers come Monday night.
The game will mark the first time rookie sensation Ryan Nugent-Hopkins will play in T.O. and see the return of Ontario boy Sam Gagner, who has taken the NHL by strom scoring eleven points over three periods late last week. Add to that, the return of Hall and Eberle for their second kick at the can and the Oilers could not be coming in on a much higher note...not exactly a good sign for the Maple Leafs.

Like Edmonton, Toronto has gone 4-0-1 in their last five and are coming of a 5-0 drubbing of the Ottawa Senators on Saturday night. Netminder James Reimer has back-to-back shutouts and will be looking to make three straight against the surging Oilers. The Leafs have been led upfront all season long by the Phil Kessel - Joffrey Lupul duo but like Gagner in Edmonton, centre Mikhail Grabovski has recently found his game, collecting ten points in his last five games.

With both teams preferring to play a wide open style, this one has all the makings of being the game of the night and a must watch for hockey fans everywhere. That being said, star players tend to turn it up a notch when they visit Toronto so I fully expect big games from the three youngsters and a statement game from Nugent-Hopkins on the big stage. The recent additions of Ryan Whitney and Cam Barker back into the Oilers lineup has made a huge difference to the Edmonton blueline and the club's transition game. The last two games have arguably been the best this team has moved the puck up ice in years. As far as Gagner goes, almost anything is possible and I wouldn't put it past Sam to have another impressive performance, in front of family and friends.
Posted by Oil Drop at 4:32:00 pm