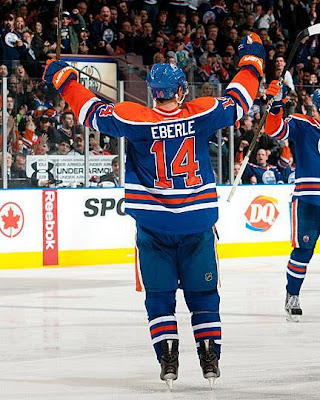 Jordan currently leads the Oilers in the following categories:
In what has been a very tough season for the Edmonton Oilers in the standings, Eberle has without question, been the brightest of some very bright lights that have emerged this year. We have seen Hall take the next step in his development towards stardom, Nugent-Hopkins and Jeff Petry showing they are NHL ready and Sam Gagner finally taking some monster strides forward, in proving he is a legit top six forward. That being said, the biggest move has been made by the former WHL Player of the Year. While Eberle led this team in scoring last season, he looks like a totally different player. His confidence level is at an all time high and he has not only excelled this season but has managed to do it while getting the short end of the stick, at various times, when it came to ice time and linemates.

This started in game one, when Jordan was placed on a line with Ryan Smyth and Eric Belaner. After being one of the best players in training camp and showing instant chemistry with Nugent-Hopkins, the former Regina Pat found himself with the two vets and looked completely lost. Even more confusing, he started the year on the second power play group. Luckily, it only took a couple games and an injury to Ales Hemsky for the staff to realize the error in their ways and found him better linemates five-on-five and back on the team's top power play unit. The results were almost instant and Eberle hasn't stopped producing since.

At this stage of the game, he is not only one of the Oilers most exciting players but he is easily the team's purest goal scorer. Jordan has had the ability to score big goals throughout his junior career and little has changed in Edmonton. The Regina native has one of the quickest releases in the game and has an absolutely sick set of hands in tight. In my mind, you would be hard pressed to find a player anywhere in the NHL who is better. Having said all that, one would think the Oilers coaching staff would be going out of their way to find the youngster as much ice as possible but it seems like the opposite.

Don't get me wrong, I am not implying he gets no opportunity to succeed but considering he has been their best player and sits sixth among forwards with 16:47 minutes in average ice time, is rather perplexing. The kid thinks the game at a whole different level and rarely, if ever, makes a bad decision. Does he have areas that need improving? Of course he does but making the right play after he has jumped over the boards, is not one of them. It may be because they don't want to put too much on his plate too quickly but I think the time has come to throw caution to the wind.

Almost every team in this league plays their best players close to or more then twenty minutes a night. In fact, the only players in the top fifty scorers that average fewer minutes then Eberle, are Tyler Seguin and Milan Lucic. Neither player is in the top thirty-five in scoring and they both play on arguably the deepest team in the league. How this team can continue giving players like Ryan Smyth and Shawn Horcoff twenty plus minutes a night and not push some of those minutes onto Eberle and Hall, is mind boggling. Your best players need to play and play a lot and Jordan Eberle is just that. The kid is more then capable of helping out on the penalty kill and his line should be seeing more time in five-on-five. Frankly, these kids are thoroughbreds and should be used as such.

This team's best players are their kids and by a very wide margin. As mentioned, they need to play more and I feel a guy like Eberle is primed to take on a bigger role. If he is given more opportunity over the final twenty-eight games, his second NHL season could wind up being one to remember. Coming into this year, I had Eberle slated for 30 goals and 55 points and he's about to blow those numbers out of the water. Regardless of how the final third of this season turns out, Jordan Eberle has already proven to be one of the best young players in the NHL...and one that the hockey world should be paying far more attention to.
Posted by Oil Drop at 2:37:00 am