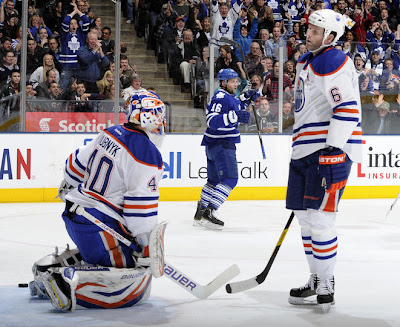 The Oilers started this one off with a bang as Jordan Eberle notched in his twenty-third of the season, just twenty-one seconds into the game. Toronto netminder James Reimer came into the game with back-to-back shutouts but it didn't take the visitors long to put an end to that run. Edmonton carried much of the play early on but the Leafs started to turn the tide at the five minute mark and would find the equalizer minutes later.

Phil Kessel stripped defenceman Corey Potter in front of the Oilers net and one quick Mikhail Grabovski touch pass later, saw Clarke MacArthur snap a shot past Devan Dubnyk. The goal was MacArthur's seventeenth of the season and brought the home side to life.

Toronto would then take their first lead, courtesy of a lovely rush from Grabovski and some horrendous coverage by the Oilers in their own end. First, Cam Barker allowed Grabovski to fly past him without much of a fight at the Edmonton blueline. Then three of the remaining four Edmonton players, decided to collapse in front of the goal and cover each other while leaving defenceman Jake Gardiner unmarked in the slot. Just like that, the momentum and lead were gone but that didn't last long in this see-saw affair.

Less then four minutes later, Eberle would finish a beautiful three way passing play for what was easily the nicest goal of the night. Taylor Hall started the play by gaining the Leafs zone, stopping on a dime and finding a streaking Eberle. Instead of forcing the play, Eberle hit a pinching Jeff Petry who almost instantly hit the Oilers leading scorer with a return feed and he made no mistake. That was the youngster's second of the night and moved him back into the top ten in league scoring. Eberle currently sits with 54 points and the second year winger is only seven points shy of top scorer Evgeni Malkin.

Moments later, the Leafs would catch a huge break when an apparent Ryan Smyth goal was mistakenly waived off. In what turned out to be a crucial play,  Toronto was the beneficiary of the bad call and that left the score even heading into the intermission.

The second period saw Edmonton fall apart, as they continually gave the puck away and simply handed goals to both Kessel and Tyler Bozak before the period was even five minutes old. The Oilers would get one of those back, when Petry's point shot found its way past Reimer but almost on cue, Edmonton would give away the puck one more time, which led directly to Joffrey Lupul's twenty-first of the season, with just over three minutes to play in the middle frame. Toronto got another break on this one, as Lupul clearly closed his hand on the puck before dropping it to the ice and depositing it into a gaping net. That's two big plays that went against the Oilers, that were blown calls on the officials part. Make no mistake, Edmonton didn't play well enough to win but the Leafs got all the breaks.

Despite a poor second period, Edmonton brought it to start the third and had the Leafs pinned in their end but couldn't sneak another one past Reimer, who made a stunning blocker save off Ben Eager early in the third on a two-on-one break. Kessel would close out the scoring, with his second of the night into an empty net.

To make the night complete, Ryan Nugent-Hopkins left early in the third period after being hit by Toronto forward Mike Brown. He was clearly favouring his shoulder on the Edmonton bench but there was no immediate word on how severe the injury might be. This was the rookie's second game back after missing the teams previous thirteen games.