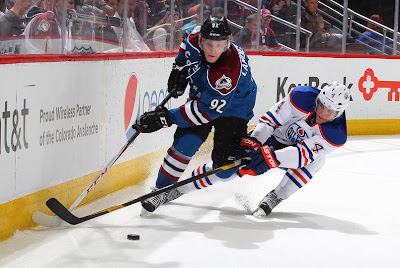 The Colorado Avalanche badly needed to come away with two points in their afternoon tilt against the Edmonton Oilers, if they have any intentions of possibly earning the eighth and final playoff spot in the Western Conference. They managed to do just that, topping the Oilers 3-2 in a shootout. Milan Hejduk led the way with an assist and the shootout winner for an Avalanche side that were the benefactor of a terrible call, that erased a good goal for the visitors. Edmonton's Jordan Eberle collected two more points giving him sixty-five on the season and Taylor Hall scored his twenty-fifth of the year, in the losing effort.

With both sides playing a wide open free wheeling style, the opening period was entertaining to watch but did not generate much in the way of chances. The Oilers best opportunity came off the stick of Shawn Horcoff, who managed to beat Avs starter Semyon Varlamov with a quick shot but could only catch iron. Colorado had a great shot to open the scoring late in the period, when rookie Gabriel Landeskog made a nice move at the Edmonton line to break in but was stoned by Nikolai Khabibulin with a nice glove save.

Late in the first, the Oilers would open the scoring thanks to Ryan Smyth and a couple of nifty plays from Ryan Nugent-Hopkins and Jordan Eberle. Edmonton's leading scorer made a nice little drop pass for the rookie centre, who sent a quick low shot into Varlamov's pads and the rebound bounced into the slot and directly to the hard charging Smyth. The goal was the vets nineteenth on the season and came with just thirty-seven seconds left in the period.

Colorado would tie things up just under five minutes into the second, when an unmarked Cody McLeod fired a shot past Khabibulin for his sixth of the season. The goal was a result of what has become the typical Oilers fire drill in their own end. Both Jeff Petry and Nugent-Hopkins went to Ryan Wilson behind the Edmonton goal, leaving McLeod open and a brutal stick check from Linus Omark did little to impede the Avs forward. From that point on, it was all Colorado and the home side would take their first lead on the afternoon, thanks to a great individual rush from the clubs elder statesman.

The veteran Hejduk flew into the Edmonton zone and blew past defenceman Ryan Whitney as if he were a  garden gnome, and broke in all alone on the Oilers netminder but Khabibulin was up to the task, making a brilliant pad save. Unfortunately for the visitors, Peter Mueller beat Ladislav Smid to the loose puck and deposited the biscuit into the yawning cage for his sixth, on what has been another injury plagued season for the talented twenty-three year old.

Edmonton appeared to tie things at two, midway through the third when Ales Hemsky deposited a beautiful cross ice pass from Petry into a wide open net. However, an absolute brutal call on Sam Gagner cost the Oilers what should have been their second goal on the afternoon. Gagner was whistled down for interference but not assessed a penalty, for what is one of the stupidest rules in the NHL. Anyone who watched the game knows it was an awful call but make a call either way. It's either a penalty or a goal.

To the Oilers credit, they did not allow the blown call to get them down and they would tie things up one more time, this time courtesy of a great second effort by Taylor Hall. After causing a turnover at the Avalanche blueline, Hall drove hard to the net and picked up a rebound off a Eberle shot and the youngster somehow slid it past Varlamov, as he was being knocked down to the ice. The goal was an absolute beauty and number twenty-five on the season, for the second year man.

The rest of the way, it was up to Khabibulin to get this one to extra time. The veteran netminder made a number of big saves down the stretch and got a little help from his goal post, on an in tight opportunity off the stick of Paul Stastny. The Avalanche out shot the Oilers through sixty minutes 30 -27 but had far more quality scoring chances throughout the afternoon.

The five minute overtime session was end to end and highly entertaining hockey for all to enjoy.  Edmonton had the best chance during extra time, when Hemsky came flying in off the side boards but was unable to tuck a backhand past the Avs puck stopper. With nothing settled after sixty-five minutes, the two sides were off to the shootout but it didn't last long.

Hejduk would kick things off with a beautiful shot under the cross bar, leaving Khabibulin no chance and giving Colorado the early lead. Eberle was up first for the Oilers and continued his recent struggles in the skills competition, as he was poke checked by Varlamov before getting a shot off. Mueller would go next for the Avalanche and promptly beat the Edmonton netminder clean to the glove side to make it 2-0 for the Avs. That meant Gagner had to score to keep this one going but had his attempt turned aside by the red hot Russian netminder.
Posted by Oil Drop at 6:09:00 pm