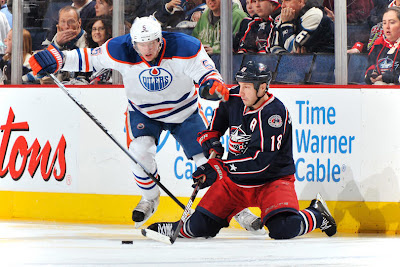 In what has become the norm, rather then the exception over the past seven days, we were treated to yet another dull opening period. While I have little doubt it can be difficult for non-playoff teams to find that drive to finish out their schedules, it has become almost painful to watch both sides come out with lethargic efforts, in four of the Oilers last five games.

In an opening frame that featured twenty-four shots from the two sides, it was about as vanilla as one might think a game between the league's bottom two teams might be. Columbus did manage to open the scoring before the period was out, when Mark Letestu picked up a rebound and deposited his tenth of the season behind Devan Dubnyk to give the Blue Jackets the lead heading into the intermission.

Period number two would be a completely different beast all together. Six goals, a penalty shot, an NHL first and some awful goaltending, turned this one into something worth watching. Far from a masterpiece but at least it was entertaining.

Ryan Jones evened things up, deflecting Ryan Whitney's point blast up and over a helpless Steve Mason, for his seventeenth of the season. After a torrid start to the year and terrible middle portion, Jones is suddenly just one goal shy of matching his surprising total from lat season.

Columbus would regain their lead at the 7:42 mark, when Rick Nash was somehow given a penalty shot after being hooked by the Oilers Linus Omark. While Omark clearly deserved a hooking infraction, it was rather puzzling to see a penalty shot called with Nash being surrounded by three Edmonton players. Nonetheless, the call was made and the Jackets captain beat Dubnyk with a quick shot, that the netminder would love to have back, for his twenty sixth of the season.

That goal seemed to spark the Oilers and lull netminder Steve Mason to sleep, as Edmonton would score four times in an eight minute span on the former Calder Trophy winner. Chris VandeVelde would start the onslaught, beating Mason with a wrist shot from well out, for his first career NHL goal. VandeVelde, who was just recalled to replace the injured Shawn Horcoff, made the most of his opportunity picking up the third point in thirteen career games.

Less then three minutes later, Ladislav Smid's point shot found its way past Mason to give the Oilers their first lead. The goal was Smid's fifth of the season, which matches his previous career total heading into this year. It has been a breakout season for the rugged blueliner, at both ends of the rink, as he continues to move up the Oilers depth chart on the backend.

Rookie Ryan Nugent-Hopkins picked up his second assist of the afternoon on the go ahead goal, giving the youngster forty-nine points on the season and put him back atop spot the rookie scoring race. The Nuge now sits with a one point lead over Colorado's Gabriel Landeskog and a two point cushion over New Jersey's Adam Henrique, despite having played only fifty-six games on the season.

A minute and a half after Smid's goal, Ben Eager would make it a two goal lead with his eighth of the year. The rugged winger picked up a lose puck along the sideboards and fired a shot on net, that found its way past Mason and the route was on.

Sam Gagner put the final nail in the coffin, scoring on the power play with just over thirty seconds to go, in what was a disastrous middle frame for the home side. Sam was allowed to simply walk out and roof his seventeenth of the season, past the beleaguered Jackets netminder. As poor as Mason was in the Columbus net, he had little to no support in front of him and Edmonton took full advantage.

Jordan Eberle picked up his second point of the day on Gagner's marker, giving him seventy-three points on the season and vaulting him back into tenth spot in league scoring. The second year winger has a legitimate shot at becoming the first Oiler player to register an eighty point campaign, since Doug Weight's ninety point season in 2000-2001.

Allen York took over in between the pipes for the shell shocked Mason but the final twenty minutes were nothing more then a formality. Derick Brassard scored his thirteenth of the season on a power play to make it a 5-3 game but Eric Belanger closed out the scoring, with his fourth of the season into an empty net.

With the victory, Edmonton is now 5-0-2 in the last seven games and are suddenly just four points shy of "challenging" for the twenty-second spot in the overall standings and in the process, lose their shot at another potential lottery pick in this summer's NHL Entry Draft. A curious time to start stringing wins together but at some point, losing can no longer be accepted.
Posted by Oil Drop at 7:55:00 am