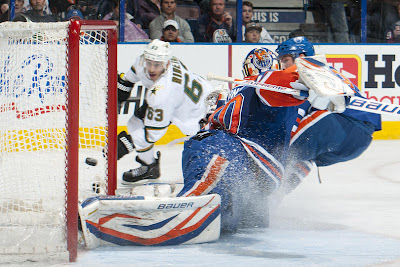 
Just over six minutes into action, defenceman Andy Sutton was whistled down for slashing, giving the Stars an opportunity to draw first blood. Instead, it would be the Oilers who would get the best scoring chance but Lehtonen made a great save off blueliner Jeff Schultz, on a two-on-one break, to keep the game scoreless.

Ryder would open the scoring with a great individual effort, that saw the Stars forward go, untouched, through the middle of the ice and past Devan Dubnyk, to make it 1-0. Jeff Petry was the last man standing between the Dallas winger and his goaltender and Petry was as useful as a pylon. The young rearguard was caught flat-footed and his half-hearted stick check, to disrupt Ryder, was embarrassing at best.

Edmonton nearly tied things up late in the frame but Lehtonen came up huge, robbing Ryan Nugent-Hopkins in tight, with a great save with just over two minutes to go. The period ended with the visitors holding a one goal lead on the scoreboard and a slim thirteen to twelve advantage on the shot clock.

Early in period two, Ales Hemsky turned over the puck at the Dallas blueline that allowed the Stars to breakout on a two-on-one break. Centre Mike Ribeiro and Loui Eriksson played it to perfection, leaving Petry in no man's land and the Stars with a two goal cushion, courtesy of Ribeiro's eighteenth of the season.

The score would remain the same, until early in the final frame. While shorthanded, forward Jordan Eberle corralled a loose puck in the neutral zone and broke in all alone on the former second overall selection but was absolutely stoned by the Finnish puck stopper, with a brilliant pad stop to keep it a two goal margin.


That save would be rather large, as Ryder scored his second of the night and thirty-fifth on the year, after another brutal shift for the tandem of Petry and Corey Potter. While the duo are not a regualr pairing for the Oilers, they were caught out on the ice together twice for extended periods of time and both resulted in goals for the Stars.

After struggling to find any sort of rhythm over the opening forty minutes, head coach Tom Renney decide to put all his eggs in one basket and assembled a line consisting of Eberle - Nugent-Hopkins -Hemsky. While Eberle and Hemsky have never played together five-on-five, the trio had instant chemistry despite having the sophomore forward play on his off wing. It seemed as though every time the line hit the ice, Edmonton carried the play and created scoring chances.

The move would pay off at the 8:21 mark, when Hemsky had Potter's point shot rebound directly off the end boards to the unmarked winger, who slid his tenth of the season into a wide open cage. Edmonton suddenly had some life but were actually lucky to have scored after another horrendous line change.

With the newly formed Nugent-Hopkins line buzzing, Eberle came to the bench for a quick change after being double shifted. Unfortunately for the Oilers, they were asleep at the switch as Ryan Smyth did not jump onto the ice for at least ten to fifteen seconds, leaving Edmonton a man short. Luckily, the miscue did not cost them and shortly after regaining possession in the Stars zone, they would receive that friendly bounce, that ultimately allowed them to get on the board.

With exactly five minutes to go, the Oilers would go on the power play for the fourth time on the night and for reasons only known to the coaching staff, they decided to break up the Eberle-RNH-Hemsky trio in favour of their usual set-up that had not produced all night. In my mind, it seemed odd to break up the only line going at even strength but that is the route they went and it back fired. After the top unit accomplished next to nothing, the second line of Jones-Smyth-Hemsky were utterly useless and Jones made things even worse, by taking a bonehead holding penalty with thirty-five seconds left in the man advantage.

With both teams set to play four aside for the next thirty-five seconds and Edmonton trailing by two, the Oilers went with the Eric Belanger-Lennart Petrell duo up front instead of putting some fire power on the ice and all that move did, was help the Stars kill off the remaining three and half minutes off the clock.
Posted by Oil Drop at 2:06:00 am