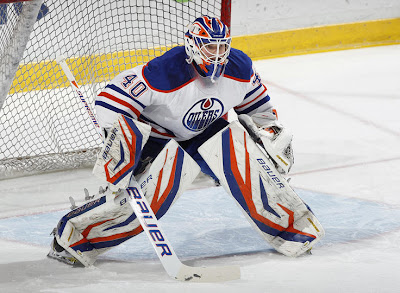 Since the start of the New Year, Dubnyk has put together a rather impressive stat line and when you compare it to his performance to start the year, the turn around has been staggering:

Obviously, Khabibulin's stellar start played a huge role in how little time Devan saw between the pipes. Some have suggested that the Oilers rode the veteran netminder far too long this season and those people couldn't be more wrong. Dubnyk played just as many games as the veteran Russian in December and was simply not good enough. When you look at his body of work over the first couple of months and add his poor play when given an opportunity in December, the coaching staff had little choice but to go back to Khabibulin. To that point in the season, Devan had been given the shot at the starters role on two separate occasions and both times, he did not get the job done. That's not on the coaches, it is on the player.

As the page turned towards another calender year and Edmonton continued to lose hockey games, while piling up a ton of injuries, the club's mindset turned on how to use their goaltenders. There was zero doubt as to which goalie had been better over the first thirty-seven games of the season  but the time had come to let Dubnyk have the reigns and see what he could do.

Khabibulin has played in just fifteen of the Oilers last forty games, which over a full season, puts them right on pace for the 50/30 split in favour of Dubnyk. While the organization was hoping it would naturally occur, it didn't exactly play out in the fashion that they thought it would. Having said that, it ultimately unfolded as they had hoped.

Since January 2nd, the Oilers 2004 first overall selection has been very consistent and at times, carried this team on his back. It seems as though, once Dubnyk found his game his confidence returned and he has been a different player since. While the third year Oiler has always struggled with letting in a poor goal at the worst possible time, he has started to take huge strides in limiting the frequency of those blips on the radar screen..

Dubnyk is a big guy, who is at his best when he uses his size to his advantage. He has always been and continues to be, vulnerable to shots up high but when he stays square to the shooter and keeps to his technique, Devan is tough to beat. While not the flashiest or quickest of netminders, he does have the tools and style of game to potentially be that number one guy.

With his run of strong play over the second half of this season, the youngster has now left it up to the Oilers brass to decide if they think he can be their guy moving forward. In my mind, Dubnyk will never be an elite NHL goaltender but he could turn into a top ten to fifteen puck stopper among NHL starting goalies. With that being case, the Edmonton Oilers have to now decide if they are comfortable moving forward with nothing more then a good goaltender, as their go to guy in between the pipes.
Posted by Oil Drop at 10:47:00 am