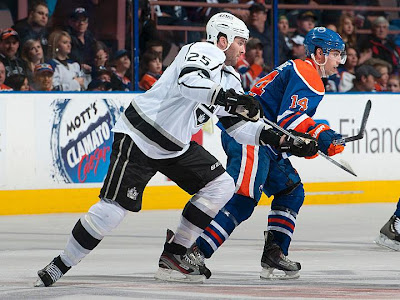 Goaltender Nikolai Khabibulin was in goal for Edmonton on Friday night and for one to suggest that things have not gone the way the veteran netminder had hoped since the start of the New Year, would be a massive understatement. While he has been nowhere near as bad as his record might suggest, he has won just once since December 22nd and that trend would continue against the Kings.

It did not take Los Angeles long to get one past the Russian netminder, as Anze Kopitar re-directed Dwight King's shot past Khabibulin at the fifty-two second mark and the visitors were quickly up 1-0. That goal gives the big centre twenty-five goals on the year and marks the fifth consecutive season that he has reached that plateau.

To Edmonton's credit, it would take them all of forty-two seconds to tie things up on the power play. Jordan Eberle sniped his first goal in six games, courtesy of ex-Oiler Matt Greene's hooking penalty seventeen seconds after L.A. opened the scoring. That gives Eberle thirty-three goals on the season, ten of which that have come with the Oilers on the man advantage. Centre Ryan Nugent-Hopkins picked up a helper on the goal, giving him fifty points in his rookie campaign. That leaves him just one behind Colorado's Gabriel Landeskog in the rookie scoring race with four games left to play, while the talented Avs forward has just two games remaining on his schedule.

With Edmonton back on the power play near the midway point of the period, it would be the Kings who would regain the lead. Defenceman Jeff Petry handled Willie Mitchell's clearing attempt like a grenade at the L.A. blueline and centre Mike Richards took full advantage, corralling the loose puck and beating Khabibulin with a wicked backhand, on a breakaway, to restore the Kings one goal advantage. While the former Philadelphia Flyers captain has had his struggles this season, he continues to be lethal on the penalty kill. The goal was Richards fourth short-handed goal of the year and marked the twenty-seventh time he has managed to accomplish the feat in seven NHL seasons.

Things went from bad to worse for the home side, when defenceman Ladislav Smid was knocked out of action with an apparent neck injury before the end of the first. Smid was nailed from behind with a cheap shot to the back from the Kings Dustin Brown, that sent the Oilers top blueliner to the ice. With Smid's history of neck issues, which includes a major surgery during the 2009-2010 season, one can only hope that he picked up nothing more then a "stinger", as head coach Tom Renney eluded to in his post game press conference.

There would be no more scoring in period one and Edmonton were fortunate to still be in this one, after sending all of two pucks towards Jonathan Quick. Not exactly a recipe for success against any goalie, let alone against the league's best puck stopper. With all due respect to the Rangers Henrik Lundqvist, anyone that has watched L.A. play on even a semi regular basis, know this guy has been on a whole different level this season. If the Kings would actually score him the odd goal, he would be pushing the fifty win barrier and challenging Martin Brodeur's league mark of forty-eight victories.

Not much changed in period two, as the Oilers continued to slumber along, despite trailing, and the Kings would extend their lead. Drew Doughty's point blast beat a screened Khabibulin for his tenth of the year. The goal came with Nugent-Hopkins in penalty box, after the youngster was called for hooking Richards. Doughty's shot appeared to take a slight deflection off the stick of Petry before beating the Oiler netminder and continues what has been a couple of rough games for the young Oiler blueliner. As bad as it had been for Petry, it was about to get even worse.

With Edmonton on the power play, Kopitar's clearance attempt deflected high off the side boards and directly into Jeff's face, sending the talented defenceman to his knees. After staying down for sometime, Petry finally got to his feet but his night was done. Having already lost Smid, Edmonton was now without their top two D men and one can pretty much guess how the final twenty minutes turned out.

L.A. controlled the period from the get go, out shooting Edmonton 15-4 in the final frame while sneaking one more past Khabibulin, to make it a 4-1 game. Alec Martinez cashed in on a rebound that the Oiler tender kicked directly to defenceman Andy Sutton but the hulking blueliner couldn't handle it, as it went right between his feet and directly to the blade of the pinching Kings blueliner.

The victory vaulted Los Angeles up the standings to third in the Western Conference, as they now lead the tight Pacific Division with ninety points and four games left to play. Both Dallas and Phoenix are a single point back of the Kings, while San Jose are just two points behind with all three teams still having four games on their schedule.
Posted by Oil Drop at 2:45:00 pm