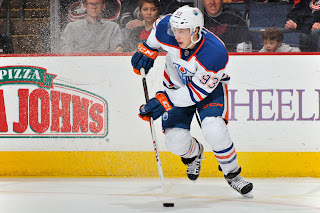 Many suggested the Oilers would be making a huge mistake if they decided to not send back Nugent-Hopkins to the Red Deer Rebels for one more season. They all pointed to his lack of size being a major concern but in my eyes, there was no way the kid would not stick and his performance during the pre-season made it a moot point. Back in early September, I wrote a  piece in which I said the kid would score fifty-three points. Obviously, I expected him to have his ups and downs but while there have been a few low points, generally revolving around the twenty games he missed due to a shoulder injury, there have been far more positives then anyone could have imagined.

While his point totals are in the neighbourhood I had expected, "The Nuge" does so much more. Not only does the youngster see the ice and think the game at a very high level but he has turned out to be a far better player in his own end then was expected and he has held his own in the physical side of the game. While his stature and style of play are eerily similar to a certain player that wore the number 99 in these parts, he has the same ability that Gretzky had to not put himself in danger out on the ice. Add to that, the fact that RNH took the league by storm from the get-go and made a point of doing it on the biggest stage possible, Hockey Night in Canada, and you start seeing even more similarities.

He proved to the hockey world that he was not only ready for the National Hockey League but that he already possessed the ability to make others around him better. Be it five-on-five or on the power play, whomever hit the ice with the Nuge instantly became a scoring threat. While Gretzky formed a special bond with teammate Jari Kurri decades earlier and it seems as though last year's first overall selection has found his trigger-man, in sophomore Jordan Eberle. The two youngsters had that "special somethig" from the outset and it has only grown as the season has moved along. Like Gretzky and Kurri, the two play a somewhat different style of game but they have that special knack of knowing what the other is thinking, at almost every turn.

No one expected Nugent-Hopkins to become the club's top centre from the drop of the puck  but that is pretty much what happened. Sure the likes of Shawn Horcoff were playing more minutes in the first half of the season to help insulate the kid but when a goal was needed, number 93 was coming over the boards. The Oilers were banking on the youngster being a pretty special talent and it appears as though they were right on target with their thinking.

Like Gretzky before him, Edmonton's power play runs through the Burnaby, B.C native and the argument can already be made, that RNH is the best player in the league on the man advantage. Does anyone honestly believe that it is a coincidence that the Oilers have the second ranked power play in the league? They have been in the top ten nearly all season long and this coming from a power play that has manged to crack the top twenty once in the previous five seasons. The power play is no different then last year, with the exception of the talented rookie. Despite missing twenty games, Nugent-Hopkins leads the club in power play points with twenty-two and sits just seven points behind Pittsburgh Penguins superstar Evgeni Malkin for second in the entire league. Also, consider the fact that Taylor Hall sits fourth in the league with thirteen power play goals and is only three off the league lead, despite having missed fifteen games and you clearly start to see the effect one Ryan Nugent-Hopkins has had on the power play.

The four best non-Gretzky rookie seasons in Oilers history, are as follows:


Next on that list, is Ryan Nugent-Hopkins and his forty-nine points in just fifty-six games. With six games remaining in his season, he has an outside chance of climbing to third on that list but that is not the impressive part.  When you consider three of those four players played alongside Gretzky at various times and one, in Dave Lumley, was twenty-five years old as a "rookie", the Nuge's numbers look even better. Jason Arnott had a great rookie campaign playing with former Oiler Doug Weight but while Nugent-Hopkins appears to be just scratching the surface on what he might accomplish in his career, Arnott surpassed his rookie season scoring totals only twice in eighteen NHL seasons and matched his goal total on one other occasion.

If Ryan Nugent-Hopkins had manged to stay away from injury this season, the Calder Trophy would have been a forgone conclusion. The fact that Colorado rookie Gabriel Landeskog is tied in points with Nugent-Hopkins having played twenty-two more games and the Devils Adam Henrique sits with forty-seven points in twelve more outings, shows the large separation between RNH and the other two when it comes to producing points. While neither player has the flare that Nugent-Hopkins brings to the table, both are very good and bring different elements to a game. Having said that, Edmonton's rookie centre has unquestionably been the league's best rookie but like Gretzky before him, the youngster will not take home "Rookie of the Year" honours. While disappointing for both the player and organization, I have a feeling both would be more then alright with having to "settle" for winning Stanley Cup Championships...just like Gretzky did.
Posted by Oil Drop at 8:42:00 am