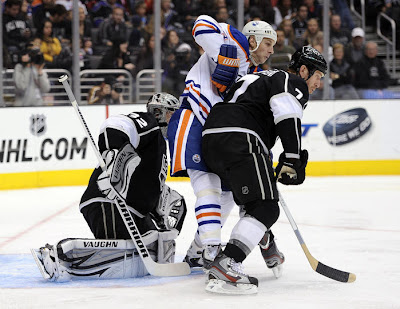 This one would remain scoreless through forty minutes,, thanks mainly to the play of Dubnyk. The goaltender continued his stellar play, turning wave after wave aside and giving his undermanned side a chance to stay in the game. He had a little help along the way, with a goal being called back in the second and a Dustin Brown shot finding the post instead of the back of the net in the first but the rest of the way, it was all Dubnyk. He made a number of key stops to keep the game scoreless, the best of the bunch being a diving stop off Anze Kopitar late in the middle frame. Devan did all he could to hold them in but eventually the wall broke.

Having just killed off the final eighteen seconds of Ales Hemsky's late second period penalty, Edmonton seemed set to go out and try and steal another two points that they had little right taking. Unfortunately, it took Kopitar all of sixteen seconds to find the pinching Slava Voynov, who ripped a slapper off Dubnyk and into the Oilers cage. The goal was the talented blueliner's eighth on the campaign, in just fifty-two games. The impressive play of the young Russian defenceman, was the main reason L.A. were comfortable moving former third overall selection Jack Johnson, in a deal to acquire centre Jeff Carter from the Columbus Blue Jackets.

Just under four minutes later, Edmonton would be handed a golden opportunity to even things up. Kings forward  Trevor Lewis, took a double minor for high sticking Teubert deep in the Oilers zone and put the visitors on a lengthy man advantage. Give Los Angeles credit, they came out hard and badly odd worked Edmonton over the next four minutes and kept the visitors from registering a single solitary shot on the four minute power play.

With less then three minutes go and Edmonton pressing forward into the Kings zone, Sam Gagner decided to take an ill advised slap shot, that missed the net by at least five feet and essentially worked as a perfect clearing attempt to send L.A. on a two-on-one break the other way. They would take full advantage of the Oilers miscue, as Dwight King deposited a lovely feed from Mike Richards, over Dubnyk for his fifth of the season and put this one to bed.

Kings netminder Jonathan Quick had one of his easier nights of the season, again, courtesy of the Oilers. Edmonton has now faced the league's top goalie twice in the best four days and managed to send all of thirty-three shots his way. Not surprisingly, both games have resulted in losses and Edmonton scoring all of one goal.