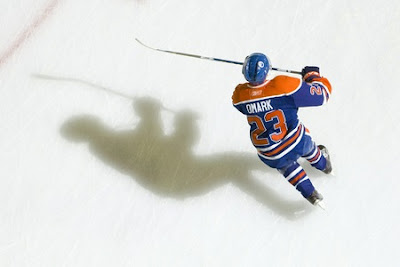 After Omark was brought back to the big club on March 5th, the coaching staff inserted the second year winger into a top nine role for five straight games and the youngster produced his first two goals of the season. After finally showing signs that he might be able to salvage something from what has been a forgettable campaign, the twenty-five year old found himself in the press box, as a healthy scratch, against the Calgary Flames. Not an overly surprising move considering they were playing a somewhat physical team and as mentioned earlier, when healthy, Omark doesn't seem to fit. That being said, after Hall was knocked out of the lineup by Flames defenceman Cory Sarich, he found himself back in the starting lineup.

While he did get into four of the next five games, Linus still found himself predominantly playing in a bottom six role. This despite being one of the best players on the ice against the Tampa Bay Lightning on 22nd of March and showing jump that was lacking from the majority of this teammates. Three games later, he was back in the press box and hasn't seen the ice since. Confused? You should be.

With Taylor Hall sidelined for the remainder of the year and the Oilers having already recalled Teemu Hartikainen, it seemed pretty cut and dry as to what route the club should go over their final eleven games. Give both Hartikainen and Omark a chance in a top six role with either Jordan Eberle and Ryan Nugent-Hopkins or Sam Gagner and Ales Hemsky.and see how things go. Instead, they have decided to make the Swede a regular scratch and continue to treat all of us to one more run of having to watch the likes of Ryan Jones and Ryan Smyth playing top six minutes. Not surprisingly, the duo of Eberle and RNH have created almost all of the Oilers scoring chances in recent weeks. It has got to the point, that the second unit power play on Monday night against the Kings had a forward line of Jones - Gagner - Smyth...really?
If the intent was to call Omark up and punish him for speaking his mind on various issues in the past, then they have successfully achieved their goal. If not, then what was the purpose of the call-up? Why not just leave him in Oklahoma City? Maybe it was because he said he would rather play at the World Championships then play in the playoffs with the Barons. Perhaps it was something else but at this stage of the game, one thing is certain. The Edmonton Oilers should do themselves and Linus Omark a favour and not qualify the soon to be free agent.
Posted by Oil Drop at 12:23:00 pm